You are here: WIAW

In forewarning, this post contains a lot of brown, processed foods. Initially I was really looking forward to this eating-like-I-did-as-a-kid-themed-day-of-eating, but as reality sunk in, my excitement quickly drained. It just goes to show how your tastebuds truly can change!

I don't remember being concerned with nutrition or calories or health in anyway as a kid and I'm so thankful for that! I ate intuitively and enjoyed food, but didn't over think it. I've been chatting with my mom about what I ate as a kid just to see if my memories matched up with hers. Looking back, my siblings and I could eat what we wanted when we wanted. I grew up in the 90's when packaging health claims and the low-fat craze was in full force. The first thing I think about when trying to remember my childhood diet is cereal. I LOVED cereal. Even until just a couple years ago I would have said cereal was one of my favorite foods. We grew up eating sugary, generic cereal like Captain Crunch, Fruit Loops, Lucky Charms, Frosted Mini Wheats and Pops, just to name a few. As I grew up, I remember switching to "healthier" cereal like Raisin Bran Crunch, Honey Bunches of Oats and Oatmeal Squares. Around the time I started eating healthier cereal I also started to mix my cereal together. Anyways, you get the picture. Cereal was my childhood. So to start this themed day of eating, I knew I had to start with sugary cereal!

Well, to be honest, I only got a couple bites into my bowl of cinnamon toast crunch, cinnamon life and cookie crips before calling it quits. Remember, the point of these themed days of eating is to get me to eat different foods and see if I can discover new recipes/food combinations that I love. I wanted to see if I still genuinely enjoyed sugary cereal and the answer is nope! So instead of eating something that I knew would leave me feeling blah, I decided to make an adult version of cereal using rolled oats, muesli, homemade granola and almond milk. I also ended up adding in some ground flaxseed. I love this concept as I can enjoy all the different textures that cereal usually provides, but I'm left feeling full and satisfied.

My main memories of lunch as a child will probably not sound at all appetizing to you. The craziest food I remember eating was a hot dog sandwich which my sister and I say we invented. It was just ketchup, mustard and relish on bread...no hotdog. I guess we liked condiments! Another meal I remember being obsessed with was a slice of bread topped with American cheese and yellow mustard. PB&Js were always a winner and my mom said we also ate a lot of $0.99 boxed mac and cheese. Oh yeah, and I definitely went through a Costco personal pan pizza phase. That sadly ended the day I got braces haha!

So for lunch this day I decided to recreate the classic PB&J. I toasted some whole grain bread and used my homemade cashew butter and a mixed berry jam. Cashew butter and jelly is amazing. Definitely try it out! On the side I had some pretzels which I was also obsessed with as a kid. Lastly, I had a glass of un-pictured almond milk on the side.  I copious amounts of milk growing up so it seemed like a necessary addition to the day.

I was really hungry this day. It could have just been an unrelated hungry day, but I do wonder if my body has grown to crave more nutrient dense foods and, since I was eating more processed foods this day, I was left unsatisfied and therefore more hungry throughout the day. For snacks as a kid I remember eating a lot of yogurt (guava flavored was a favorite!), cheese and crackers, pretzels and more glasses of milk. I remember grabbing 6 club crackers and folding a slice of American cheese into 6ths to have with it. I also loved putting cream cheese and pickles on club crackers. Bologna and cream cheese roll-ups were also a favorite.

So on this day, I decided to have some crackers as a snack. I was planning to use some vegan cream cheese, but it had gone bad so I had to improvise. I ended up topping some rye crackers with a tahini dressing and sun-dried tomatoes. This was an awesome combo that I'll definitely be eating again! 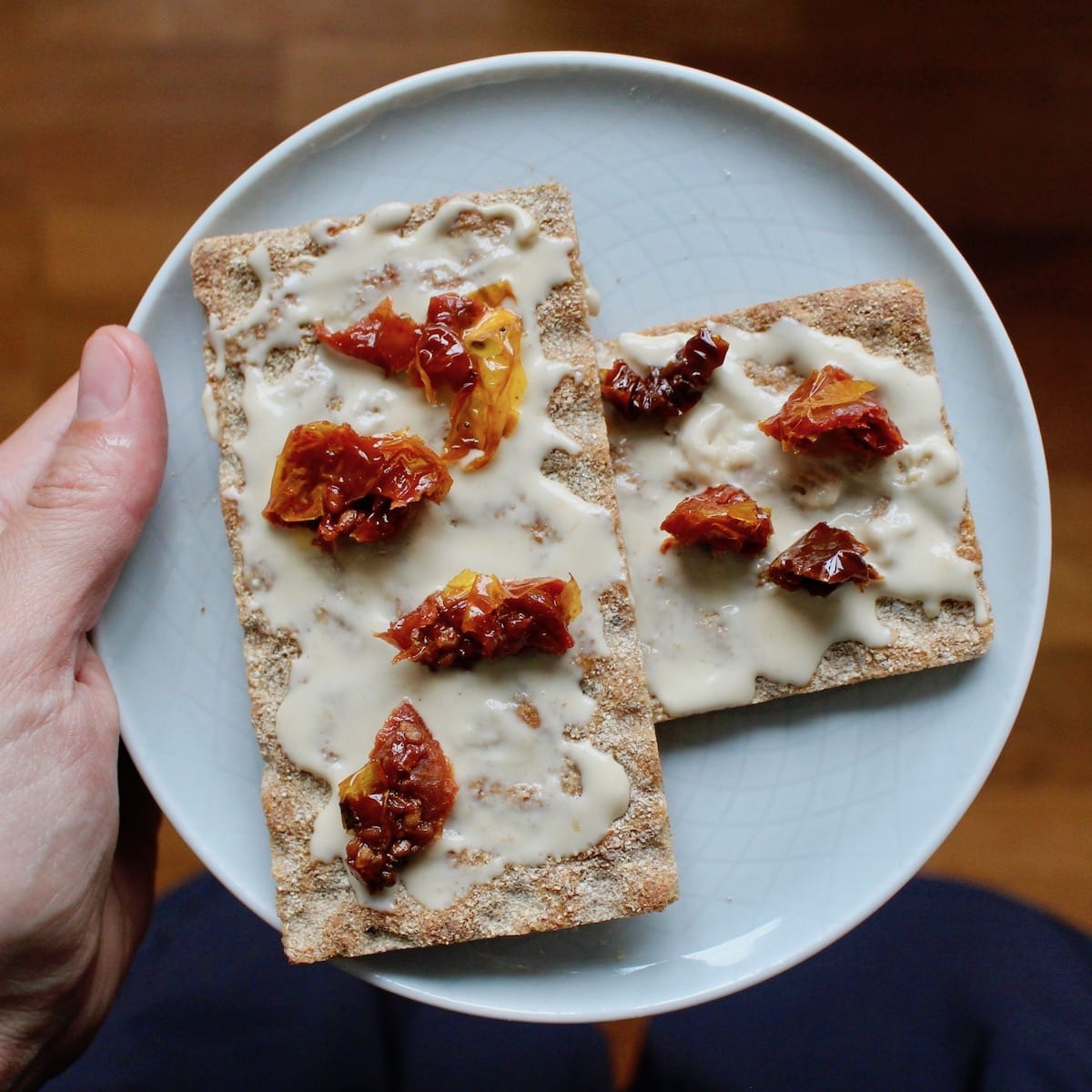 My mom is an amazing cook so almost all of my dinner memories are happy ones...except when squash and zucchini was involved. Those made me gag. Some staple dinners in our house were chicken tetrazzini, oriental chicken salad, tacos with homemade fried corn tortillas, chili on top of macaroni noodles, white bean chili, homemade bread and spaghetti and nachos. We obviously loved nachos as kids and I remember them being fairly simple with just some ground beef and cheese on top of corn chips. I decided to recreate some nachos for dinner since we had everything already on hand. I used Beanfields sea salt chips and topped those with with some leftover bean burgers (which I crumbled up) and shredded Violife vegan cheese. After baking them in the oven until the cheese melted I added some salsa on top. This wasn't the worst meal, but it wasn't my favorite meal. It tasted good, but man I would have preferred some less-processed, whole foods by this point!

Ice cream. My family was (still is??) obsessed with ice cream. My siblings and I joke about it now, but the amount of ice cream we consumed was a little insane. I'm pretty sure we never had to ask whether we could eat ice cream or not. We just always had ice cream in the freezer and we enjoyed it most nights. I remember filling my bowl to the brim with ice cream and, when available, adding toppings like chocolate syrup, cool whip, and cereal or pretzels for crunch. I still like ice cream but I honestly don't crave it. I'm more of a rich, dense chocolate dessert girl now. But in honor of my childhood, I ended the day with a couple bites of some homemade no-churn AMAZING vegan ice cream. I'll be sharing how I make this 3 ingredient ice cream on Sunday!

Okay guys. Now it's your turn! Tell me some of your childhood favorite foods below...no matter how weird they were! I've also got a vlog/video version of this post below so be sure to check that out and subscribe to my YouTube Channel! Oh, and I'm looking forward to a healthier themed day of eating for next week! I think eating a raw vegan diet for a day is just what I need:)