You are here: Pregnancy 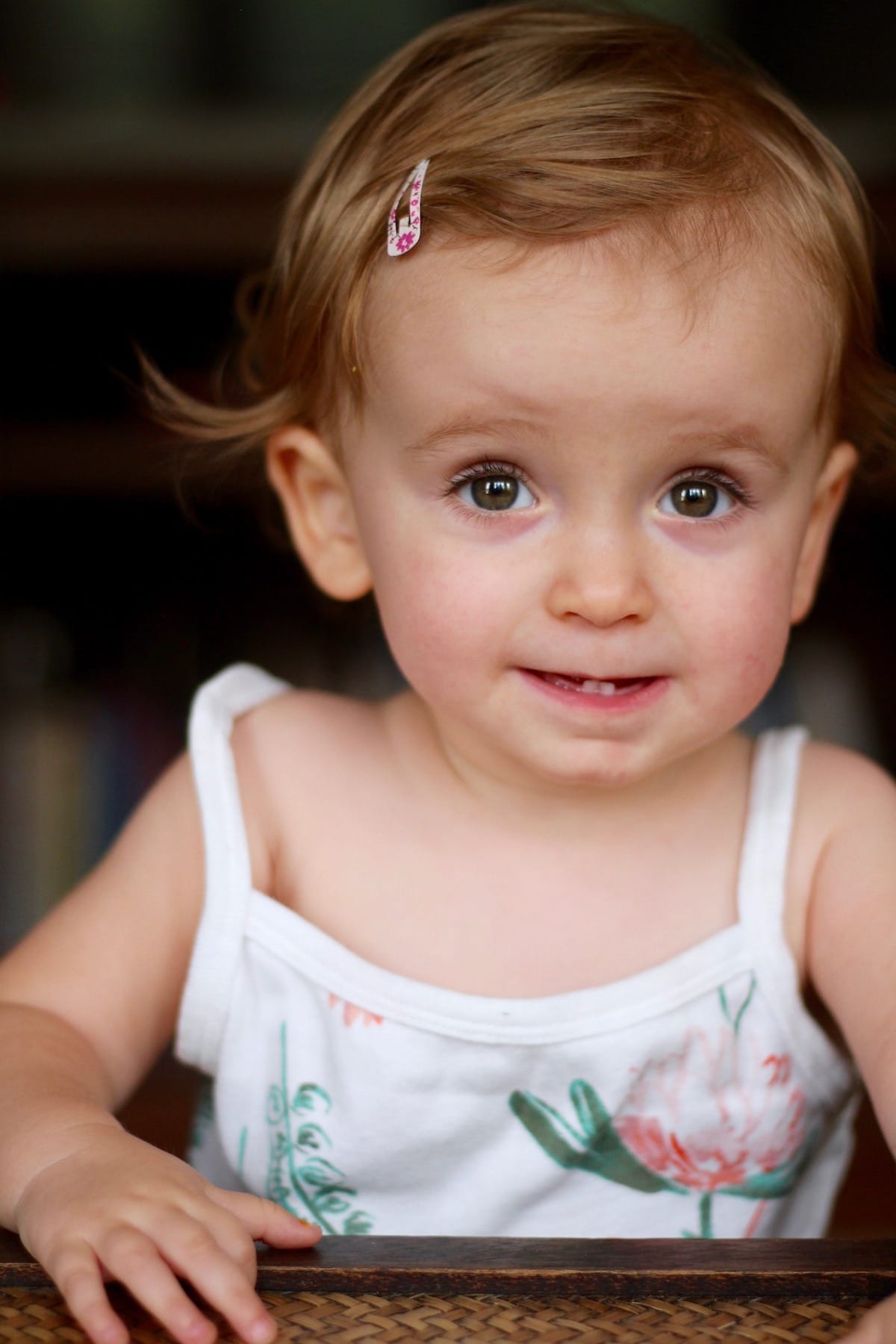 I’ve definitely been slacking on my Harper updates! The last official update I wrote was her 6 month update, but when she was 9 months old I also shared about my experience introducing her to solids. Thankfully every month on Facebook I share a photo of her along with some details about her life, so hopefully I haven’t forgotten everything!

Harper definitely hasn’t had a normal childhood so far, but she doesn’t know any better and is loved, happy and healthy. In her 15 months of life she’s been on 38 flights (5 of which were intercontinental), lived in 5 countries, only slept in a pack-n-play, never had her own fully decorated room and eaten traditional foods from Thailand, China, India, Japan, America, the Middle East and more! She’s seen more of the world in her first 15 months of life than most people see their entire lifetime!

As I mentioned above, Harper has traveled a ton already in her short life. There are definitely pros and cons to this. While she’s learning from a young age to be adaptable, to go with the flow, and to interact with people from all kinds of different cultures, I feel as if she’s had to be worn, carried, pushed in a stroller or held on airplanes or in taxis more than most kids and therefore hasn’t had as much freedom to just play and develop her gross motor skills. Thankfully, she does fairly well with all the travel. The hardest trip was when when she was 11 months old and we flew from Ireland to Thailand. She had such a hard time falling asleep on that 9 hour flight. She was too big for the bassinet so couldn’t get comfortable lying down and when she did fall asleep on me, she would often be woken up by announcements or lights. Since that flight she’s gotten better at not fighting sleep when we’re out and about traveling or running errands and gives in to sleep easier. She definitely likes to sleep on me the best!

Harper’s teeth have been taking their sweet time coming in. She currently has four teeth total–the two front teeth on the top and bottom–and has a random molar popping through. I think I see a speck of white from one or two others, but they haven’t completely cut through yet. With how long it’s taking for her teeth to cut through, she has had a long period of pain/added fussiness so we rely on her paci for comfort and cold popsicles and smoothies for pain relief.

I’ve chosen to not label Harper’s diet. She can eat all foods at this point and thankfully doesn’t have any allergies that I know of. With that said, considering I eat a plant-based diet, she too eats a mostly plant-based diet at home. While I think it’s completely possible to raise a healthy child on a vegan diet, I do think it takes a good bit of planning and wisdom. Harper’s first 15 months of life have been fairly chaotic and travel-filled, making it hard for me to feel good about limiting her diet to just plant-foods at times. For instance, there have been trips we’ve taken where we don’t have access to a good grocery store or are living off random hotel buffets where there aren’t enough plant-based options to meet all of Harper’s nutritional needs (think white rice and white bread). In those cases, in addition to the plant-based options available, I’ll often give her some eggs, yogurt or fish to enjoy which helps round out her meal and she loves them all!

As for milk, that was honestly a stressful decision for me. Harper weaned herself at around 12 1/2 months. She would nurse in the mornings and evenings, but in the afternoons she would just push me away. I decided to continue pumping so that she could have breast milk for longer and I lasted until she was about 14 months. While I don’t think cow’s milk is necessary to raise a healthy child, it still doesn’t seem widely accepted to do anything else. This stressed me out a lot as my gut and nutritional knowledge was telling me it wasn’t necessary, but other’s were saying differently. Once fully weaned, Harper had a wide variety of milks from non-dairy to cow’s milk. At one point, after a week of diarrhea and vomiting from some kind of sickness, we felt that full-fat cow’s milk might be the best thing to help her gain a little weight. Yet after two days of that, she had so much stomach discomfort and more grey diarrhea. I don’t think she’s allergic, but that “experiment” confirmed that we weren’t going to rely on cow’s milk for Harper’s nutritional needs.

As of right now, I’d say Harper get’s most of her nutritional needs met from solid foods. She eats a ton! As she eats mostly a plant-based diet, I include a lot of black sesame seeds (either in paste or powder form), fats (from flax oil, ground flax seeds, avocado, coconut, chia seeds, nut butters) and beans, tofu and lentils in her diet. These are all nutritionally-dense foods and are high in iron and calcium. I also give her a multivitamin that covers her iron, vitamin D, B12 as well as others. If she’s thirsty, she drinks mostly water and almond milk, although she often refuses water and still wants her milk from a bottle! I find she drinks more from her sippy cup when I just place it casually beside her while she’s playing or in her stroller. That way she can take drinks when she wants and doesn’t feel like I’m watching her to make sure she drinks something. She’s definitely independent and stubborn!

As I mentioned briefly in the travel section, Harper has been slower to develop her gross motor skills. There have been times where I’ve been worried that something is wrong or even talked with a doctor about it, but she continues to make progress and improve and the doctors aren’t concerned. She’s taking her sweet time, is developing in her own way and at her own pace. She is constantly on the move though! While she gets around mostly by scooting on her bottom, crawling or cruising along furniture, she has started to enjoy walking best, with our help of course. She holds onto both of our hands and walks/runs pretty quickly everywhere. I’ve tried to get her to hold on to us with just one hand, but because she’s fallen a couple times doing that, she’s currently too scared to try again. I’m hoping her confidence will grow and she’ll try again soon. She’s definitely getting close!

Harper has thankfully been fairly healthy her entire life. Other than having a stuffy nose a few times, she’s rarely been sick. However, in January she managed to catch the flu. We had to cancel our family vacation to Railay Bay and quarantine ourselves in a hotel room until she got better. It was hard to see her so sick, but thanks to some meds and lots of sleeping and snuggling, she got better within a week.

Just some other random things about Harper:

I figured I could include a little bit in this post about how I’m doing. If you’ve been reading the blog regularly, then you’d know the past year has been really hard. I’ve absolutely loved being Harper’s mom, but with all the constant travel, packing and unpacking, living with other people or in hotels, breastfeeding, etc. I feel like my body has gone through a lot physically and mentally. While my situational depression has seemed to vanish now that we’re in Kuala Lumpur and feeling settled, I’m definitely not in the best place physically. Since we left China back in October, I’ve felt pretty lethargic and not like my usual energetic self. A lot of that was due to the situational depression starting to set it, but a lot of that was also due to some deficiencies that I didn’t realize I had at the time. I finally got around to getting some blood work done a couple weeks ago before we left Chiang Mai and found that my iron and iodine are low. Both of those deficiencies can be common in a poorly- planned plant-based diet and, while I consider myself a responsible plant-based eater (I supplement and try to eat a well balanced diet), this year has definitely taken a toll on my body and I have not been taking care of myself as well as I could have. I’m glad I got the blood work done as it’s given me a good kick-in-the-butt to take better care of myself and eat more of the foods I need to in order to raise my iron and iodine back to healthy levels. I’m hoping the fact that I’m no longer breastfeeding will also help with increasing my levels.

Another sign that I’m not at my optimal health is that I still don’t have a period since weaning Harper. A couple months ago I had a feeling that my lack of period wasn’t just because I was still nursing, but was also because of poor health. I lost a good bit of weight this past year with all the breastfeeding, travel and stress and I’ve been worried that my body isn’t healthy enough to have a menstrual cycle. I know every mom gets their cycle back at different times after giving birth, but if I don’t get mine soon I’ll definitely be taking measures to get it back. That will probably look like less exercise, eating more fat and lots of rest!

With all the negative things out of the way, I am in a MUCH better place since I wrote the post titled “Nomadic Living, Depression and Rest.” I met with a counselor for a few weeks in Chiang Mai and that was really helpful. She definitely thought that the bouts of depression we due to our nomadic lifestyle and felt like getting settled in KL would be the best thing for me. That’s proven true! While we still haven’t found our own apartment, knowing that we don’t have to move or travel anytime soon has lifted a huge weight off my shoulders. Getting out of the horrible pollution in Chiang Mai has also been a game-changer. I’ve been loving exploring Kuala Lumpur, playing with Harper outside, swimming laps at the pool and connecting with new friends. I’m feeling back to my normal self mentally, so hopefully that will help me heal physically as well.

Okay, this post is getting too long so I’ll end it here! Thank you for all of you who follow along on our journey. I so appreciate you! If you enjoyed this post and want to see more Harper and life updates, please leave a comment down below letting me know!

Oh, and her is a picture of Harper on her first birthday. She loved being the center of attention!