You are here: Parenting as a Plant Based Mom 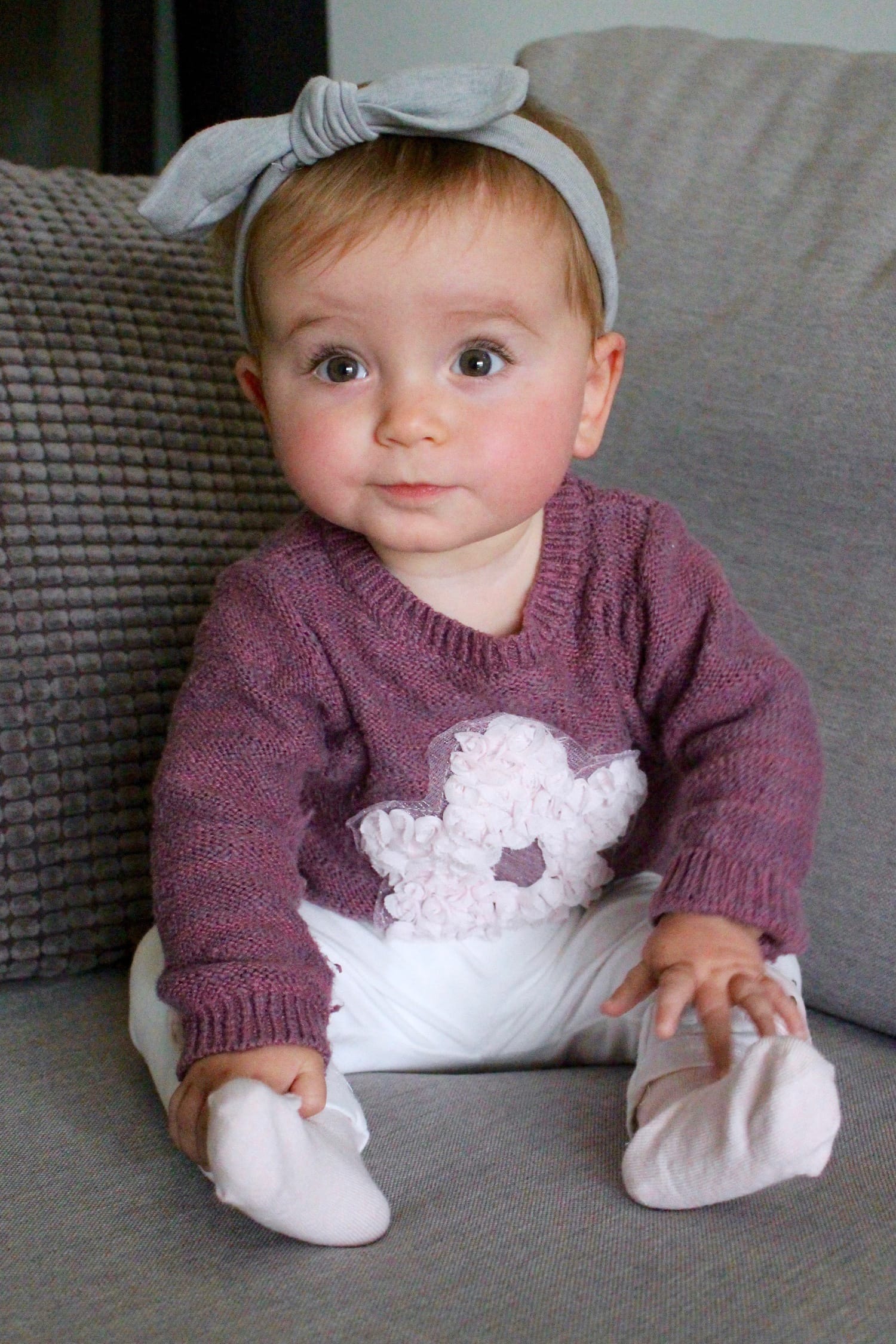 Harper girl is 9 months old as of last week and I still can’t believe how fast time is going. If feels like just yesterday that she turned 6 months old and I was stressing over how to start introducing solids. Now it’s three months later and our little girl is loving every food I give her! She’s tried so many different foods too. Kiwi and dragon fruit, beans and tofu, gluten free pancakes and oatmeal, peanut butter and green smoothies…just to name a few. She really hasn’t tasted a food she didn’t like! My fingers are crossed that she’ll continue to be a good eater as she gets older.

The road to starting solids wasn’t easy for me, as I’m sure is the case for many first time moms. Looking back now I wish I hadn’t been so stressed about it and had enjoyed the process more. I guess I’ll save that mentality for baby number 2 (and no, no baby brewing over here)! I think in this day and age there is so much information available to us that sometimes simple things can become a lot more complicated than they need to be.

I’ve been documenting Harper’s life and my motherhood journey since Harper’s birth. I’ve shared how things were going at 3 weeks postpartum, 6 weeks postpartum, and 6 months postpartum. I thought it would be fun to share my experience introducing solids to Harper, including what I’ve learned in the process. With that said, this short period of motherhood that I’ve been able to experience has shown me so clearly that every baby and mom is different. While it can be helpful to read other people’s experiences or research different methods, you (the mom) really do know what’s best for you and your child!

My desires for introducing solids: 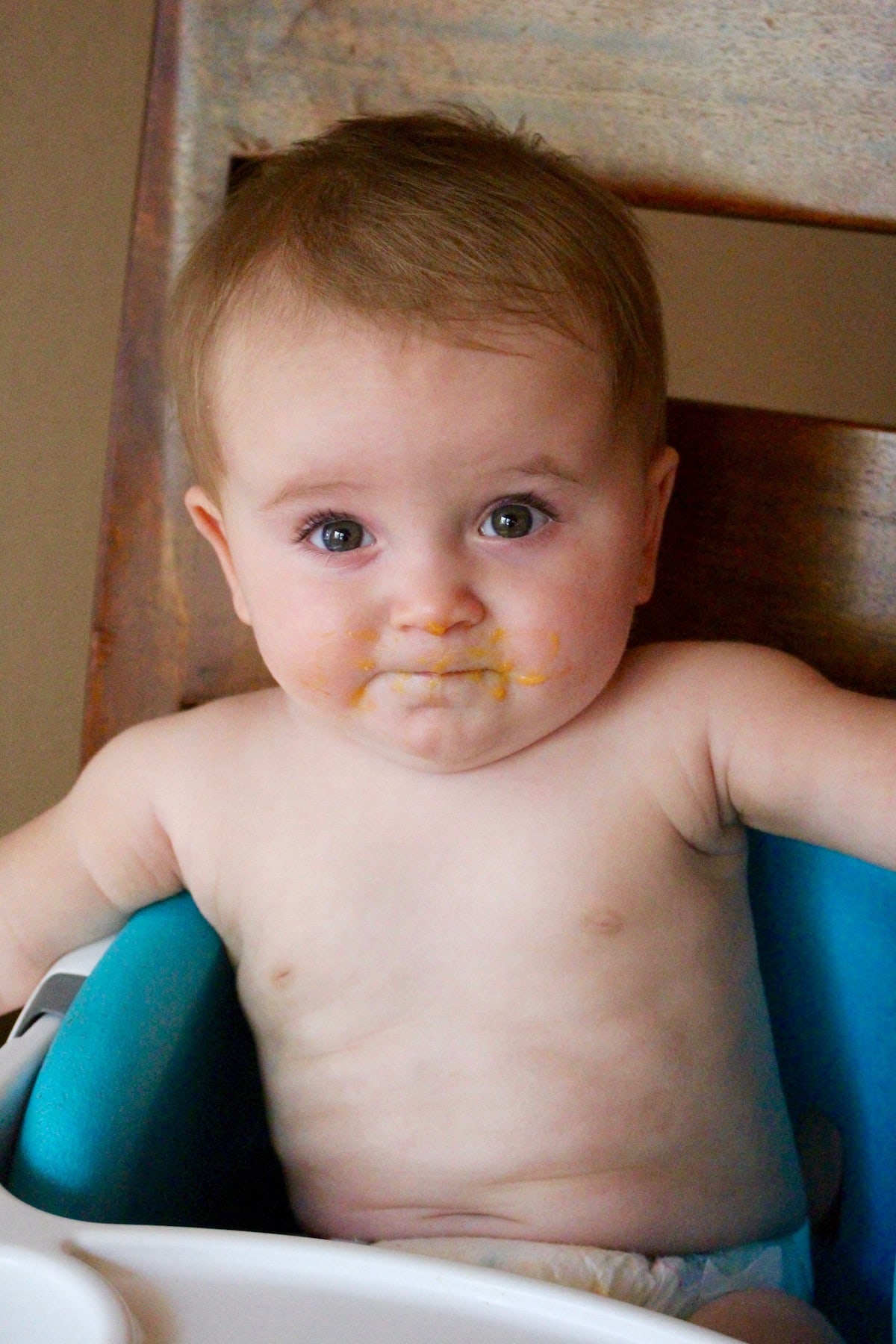 First of all I want to share what my desires were in starting solids with Harper.

As far as I know there are two main methods for introducing solids: Purees and Baby Led Weaning. Some say you can only do one or the other. Others say that it’s possible to do a mix of both. I didn’t want to take my chances with mixing the two, so I felt like I had to choose one or the other and stick with it. I had actually never really heard of Baby Led Weaning (BLW) until pregnancy. I loved the concept of it and when Harper was getting closer to 6 months old I decided to buy the book Baby Led Weaning to make sure I understood what all it entailed. After reading the book and talking to lots of friends, I felt like it would be a great way to introduce solids to Harper. But as 6 months rolled around and I started introducing solids to Harper in the way that BLW suggested, I got really anxious and basically stopped. When I was a kid I choked on a hot dog (definitely wasn’t vegan at the time!) and my Dad had to do the Heimlich Maneuver on me. That experience definitely scarred me and I think I have a more severe fear of choking than your average person.

The Baby Led Weaning method makes the difference between choking and gagging very clear, but I still became so nervous and anxious every time I tried to give Harper solid foods. Eventually I decided that I didn’t want to be stressed all day trying to feed Harper and that the traditional puree method would be best for us. Once I gave myself the freedom to NOT do Baby Led Weaning, I felt so much happier and less anxious. Giving Harper solids became something I looked forward to instead of dreaded.

I still think BLW is a great method for introducing solids, but it wasn’t the best method for me! 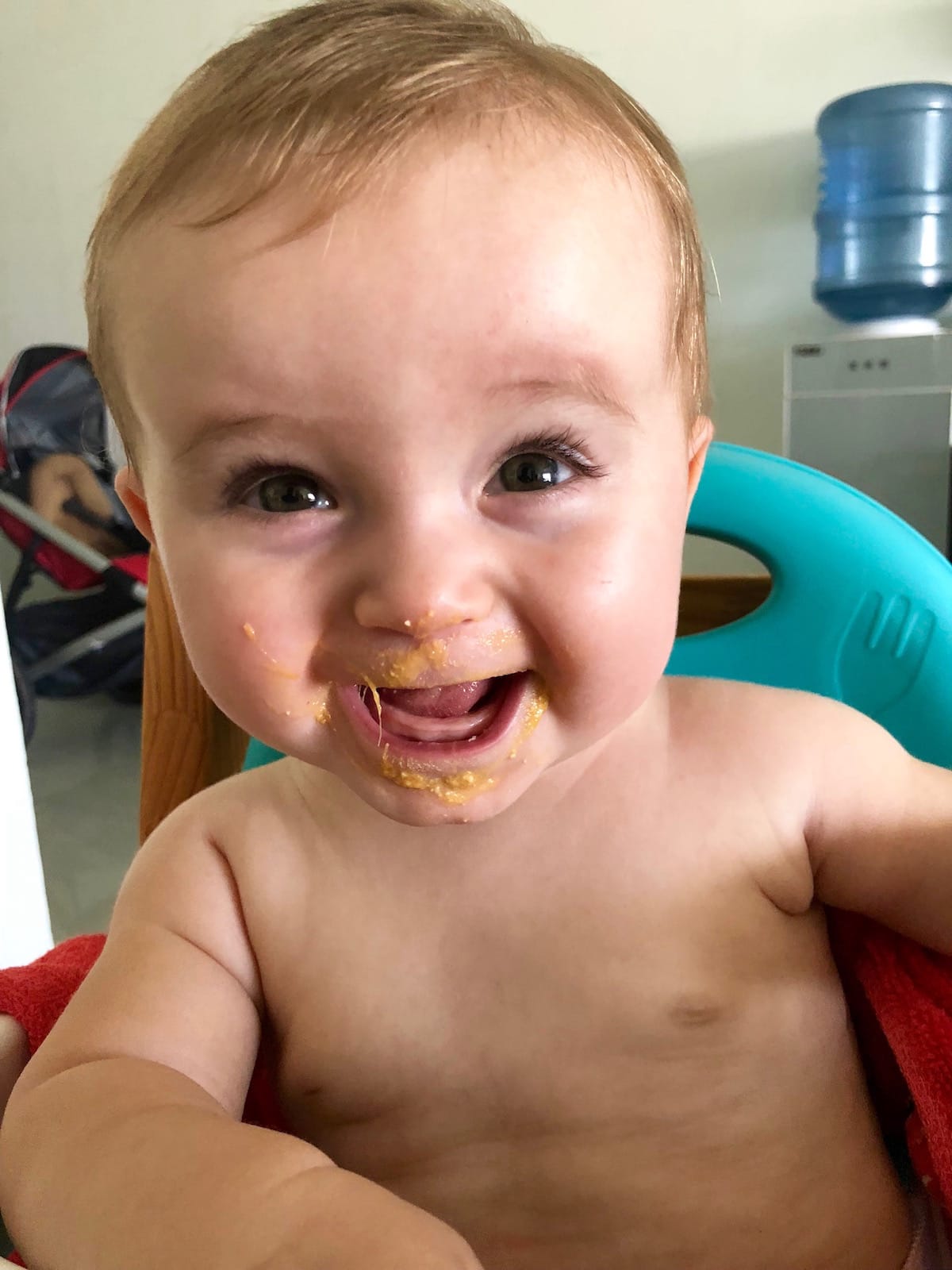 After lots of back and forth between whether or not to use BLW or do purees, I finally settled on purees or mashed foods. I know a lot of people say to start with purees and work up to mashed and then to cubes, etc., but I just studied Harper as I introduced different foods to her and gauged what I thought she could handle. When we first started I would steam and puree denser vegetables like carrots, cauliflower, apple, etc. Softer foods like banana I would just mash with a fork. Initially I introduce one new food every couple days or so. Then it got to the point where I wasn’t worried about allergies and wanted to give Harper a more varied diet, so I would mix different foods together or introduce a couple of new foods in the same day.

I actually kept a log of the new foods I gave Harper as I went. I’ll list some of them below:

You get the picture. At first a lot of the purees were thinned out with a little with water. Eventually I added less water so that she would have to start using her tongue to move food around. After I noticed that she could handle thicker purees, I started to give her pieces of soft foods that hadn’t been mashed or pureed. So instead of mashing up a banana, I would just give her a little, bite size piece. Or instead of steamed and pureed sweet potato, I would just scoop out a little of the flesh of a baked sweet potato and give it to her as is. To ease my mind about choking, I would just make sure that the pieces I was giving her weren’t round or throat sized.

Eventually I stopped pureeing any foods and just gave her well steamed vegetables that I would cut into small pieces and then, if needed, mash slightly with my finger before feeding her. We also used the Munchkin Fresh Food Feeder occasionally to help Harper learn how to chew and that worked pretty well.

As of right now, Harper still doesn’t have teeth so she can only handle foods that she is able to break down with her gums. Instead of just vegetables, fruits and potato, which is what Harper mainly ate when first starting solids, she now additionally eats tofu, beans, Vegan Gluten Free Banana Pancakes, the occasional bite of pasta, different nut and seed butters mixed into oats, quick oats, ground flaxseed and chia seeds mixed into her oatmeal, different kinds of grains like white, black and brown rice and kamut, coconut meat, etc. I don’t salt or sweeten her foods, but she occasionally consumes a minuscule amount of salt or maple syrup in a pancake recipe, etc. I’m still trying to purchase new-to-Harper-foods each week so that I can continue to feed her a varied diet and keep her used to trying different textures and flavors.

Once I gave myself the freedom to introduce solids in a way that not only worked for Harper, but for me as well, the process became so enjoyable. I’ve loved watching Harper’s face light up when she tried my green smoothie or pineapple for the first time. Or the way she gobbles down her breakfast of oats, cinnamon, peanut butter and banana. I spoon fed her for a long time, but now that her pincer grip is getting better, I’m letting her fed herself by placing small bites of food on her highchair tray. She loves to moan when she’s focusing on grabbing her food and it’s the cutest thing!

I’d love to know your experience with introducing solids, no matter how far you may be removed from that season of parenthood! If you have any further questions, please don’t hesitate to ask or leave a comment down below!