You are here: Breads | Yeasted Bread 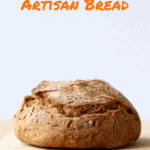 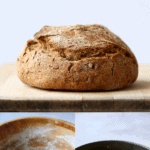 Using just four basic ingredients and minimal hands-on time, you can make freshly baked, whole wheat artisan bread right in the comfort of your own home!

It's fluffy, fresh and smells amazing!

I've shared quite a few easy vegan yeasted bread recipes on the blog, including this Whole Wheat Sandwich Bread and this Easy Italian Bread Recipe.

Today I'm adding another recipe to my blog's repertoire with this 4 ingredient Whole Wheat Artisan Bread.

Let me walk you through how to make it!

What is Artisan Bread?

There isn't an actual definition for artisan bread, at least that I'm aware of, but it basically is a loaf of bread that has a crusty exterior and a short shelf life.

It also typically requires a longer fermentation/rising time compared to other breads that are baked in a loaf pan.

My mom was the first one to introduce me to the simplicity and beauty of homemade artisan bread.

The recipe she showed me years ago was basically this exact recipe, but just using white flour. Today I'll show you how I make it using entirely whole wheat flour.

However, you can honestly use a mix of both white and wheat flour.

Baking bread used to intimidate me so much, but it honestly couldn't be easier.

To make this whole wheat artisan bread, all you'll need are the following 4 ingredients:

I don't know about you, but I get so excited about bread made with minimal ingredients!

You don't need much to make this artisan bread.

I personally don't even have everything that you're technically supposed to use to make artisan bread!

To make the dough you'll need the following:

Good news! If you don't have a dutch oven like me, you can also use an oven-safe pot with a lid (one that can withstand 475F/250C degrees) or even two taller round cake pans stacked on each other.

That's the method I use and it works great!

To make a loaf of artisan bread, you need to first make the dough.

PRO TIP: I usually like to make my dough in the evening, let it rise overnight and bake it the next morning.

Artisan bread, especially this whole wheat version, is heartier and denser than your traditional sandwich loaf.

For those reasons, we love to pair a slice or two with soup.

It also makes for great open face toasts or as a base for bruschetta.

I find it's not the greatest bread to use for sandwiches as using two slices may overpower your sandwich fillings and make a sandwich hard to eat.

How to store artisan bread

Artisan bread tastes best the day you bake it.

However, unless you have a large family, I doubt you'll get through a whole loaf in one day.

I personally just store any leftovers in a sealed container or bag in the fridge for a couple days.

You can also slice it, wrap it and freeze it for later use. If freezing this bread, just remove the amount of slices you need and toast them in a toaster, straight from frozen.

*You can use a mix of whole wheat and white flour.