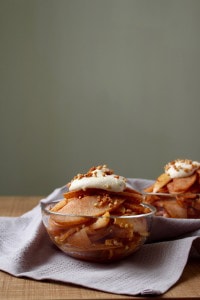 Before I share this simple and deeee-licious recipe for Cinnamon Pears and Maple Vanilla Cashew Cream, I want to tell you all a story. Hopefully you’ll stay until the end to find out why this simple story about a boy, a dog and a frog has a 26 year old so excited.

A little boy sits on a stool in his room. It’s nighttime. Outside it’s dark. The little boy’s head is resting on his hands. He is wearing thin stripped pajamas and slippers. Behind him are some old boots. Beside him is a sock and a thick stripped t-shirt. The boy is looking a glass jar. The boy’s pet frog is squatting inside the glass jar. The frog and the boy look happy. The little boy’s pet dog’s front paws are on the glass jars mouth. The dog wants to eat the frog.

The little boy and the dog are far from their home. They are looking for the frog outside. In front of them are some woods. In the woods there are lots of trees. The trees have lots of leave and branches. One thick three has a hole. One skinny tree has a bee hive hanging from it’s branch. Many bees are flying in the sky.

The little boy straddling a deers head. The deer doesn’t care that the little boy is on his head. The little boy looks scared. The little boy’s dog doesn’t know that his owner is on a deer. The deer runs very fast. The dog also runs fast. The deer runs from the woods to a cliff. On top of the cliff are lots of rock and grass. Below the cliff are lots of tree roots. The boy looks very scared. The deer looks angry. The boy and his dog fall from the cliff into the lake. The boy can’t see because his dog is covering his eyes. They fall very close to a log, but they don’t hit the log. Because the water is shallow the boy can sit in the lake. Because the dog is short, he climbs on his owner’s head. 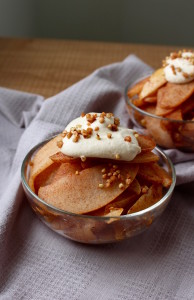 Okay, so Faith. Why did you tell us such a simple, choppy story that sounds like it was written by a five year old? Well, I thought it would be fun to share this story with you because I can tell this story in Chinese! Two months into Chinese lessons and I can’t believe I can say everything that happened in this story and much more. Yes, I need lots of prompts and help from my teacher, but I’m still so encouraged to see how far Brett and I have come in our language learning in just two months. I owe so much to my Chinese teacher. She is so patient and great at picking up what I’m struggling with and helping me. I would still be unable to talk to anyone around me if it wasn’t for her!

Don’t worry, I won’t bore you with anymore children’s stories. Hopefully, though, I will be able to share new milestones that I reach in this crazy language learning process.

But now let’s talk about dessert! I love simple desserts and this recipe couldn’t be much easier, especially if you already have my Maple Vanilla Cashew Cream (or any dairy-free whipped cream of sorts) on hand. One thing I love about fruity desserts, including this one, is that you don’t need to add much extra sweetener, if any. For this dessert, all I do is sauté some thinly sliced pears (or apples) in some water and cinnamon until soft. Then just transfer the fruit to a bowl and top with something creamy and crunchy and you’re all set!

So if you’re running late, or forgot to plan ahead, this dessert is for you. Let me know if you give it a try! Leave a comment or, even better, take a picture and tag me on Instagram so that I can see your beautiful, delicious creation! 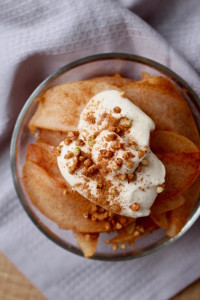