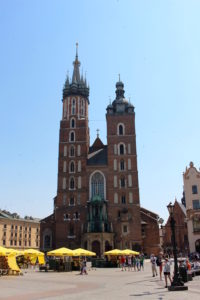 Krakow has stolen my heart.

We were only there for 2 full days, but I knew after just a few minutes of walking around the city and the center square that Krakow would be one of the top, if not the top, favorite cities from our babymoon.

The best way I can describe Krakow is that it is lively, but quaint. The center square was so fun in the evenings. It was full of people and performers, but didn’t feel touristy. Brett and I loved to bring our dinners to the square and watch a brass band play while we ate. There was also a woody park that surround the main center square and I was able to go on an early morning run one morning which was so wonderful.

The city felt really walkable, although it was scorching hot, and there were surprisingly a good number of vegan/vegetarian friendly restaurants. We only made it to two, but they were both absolutely incredible!

I believe Brett actually discovered Vegab and I’m so glad he did. We ended up eating here both days we were in Krakow because of how unbelievable their vegan kebabs were. They had a homemade recipe for faux meat that was the best faux meat I’ve ever had. I’m actually not a fan of faux meat, but the texture and flavor of their kebab “meat” was on point. I asked them what it was made of and some of the main ingredients were lentils, gluten flour, nuts and spices.

The first day we went I got the Beirut Kebab and Brett got the Olymp. Both were amazing, but we decided that my hummus filled Kebab was better, so the next day when we went back, we both got the Beirut. The portion sizes of the kebabs are hug and so satisfying! They’re stuffed with their faux meat, sauces and veggies. I couldn’t stop, “mmmmm-ing” after each bite.

If you can only eat one meal in Krakow, eat at Vegab!

Oh, and can I mention how cheap the food in Krakow was?! Our massive Kebabs were about $4 each! 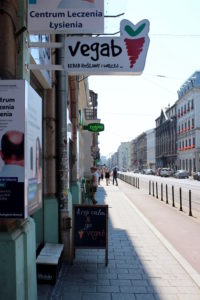 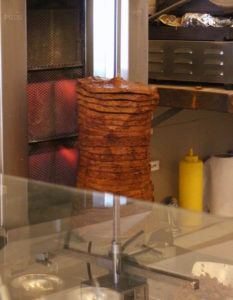 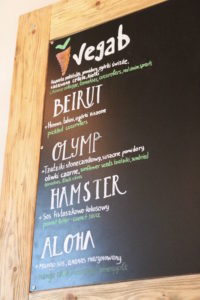 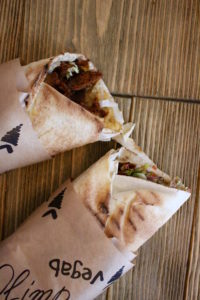 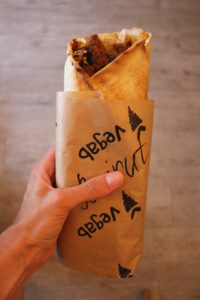 Krowarzywa was the other fully vegan restaurant we were able to eat at and it too was amazing. It’s a simple burger-focus restaurant which allows you to choose different patties, sauces and toppings. Because they don’t serve many kinds of food, the food they do serve is delicious. I ordered the millet, pumpkin and sunflower seed patty and topped it with veggies, ketchup and mustard. It was a basic burger, but oh so delicious! Brett ordered the chickpea patty and topped it with veggies and their amazing dill mayonnaise. I had a bit of his and it too was amazing.

They had fries and different kinds of drinks which you could order on the side as well. 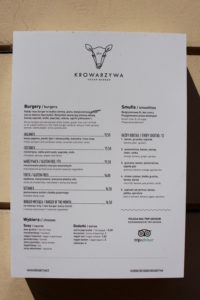 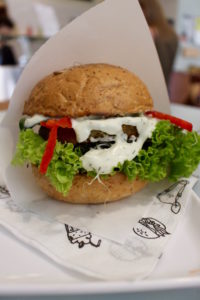 We used a tour group (which is SO unlike us) and saw Auschwitz and Birkenau in one day. The tour group was called Escape2Poland and we overall enjoyed our experience with them. Using a tour group was definitely the way to go as the tickets provided transportation from Krakow’s center square to and from the camps. We also had a tour guide which was really helpful and even got to see a documentary which showed the liberation of the camps and the issues the survivors dealt with once released.

To be honest, because I’ve read so much about that time period, nothing that I saw shocked me, but I’m still so thankful that I could see things with my own eyes. Auschwitz definitely had a museum-like feel at many points, but we were were still able to see where the prisoners slept and many of their belongings that were taken from them. We also got to see the solitude and starvation chambers, the shooting wall and the crematoriums. It’s still hard to believe that such horrors actually happened.

Auschwitz was a fairly small camp while Birkenau was massive! We walked quite a ways throughout the course of the day, but it was worth it.

I just wanted to mention this part of our time in Krakow incase any of you are interested in going to see the concentration camps as well. 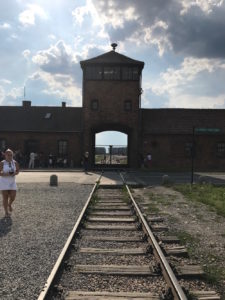