You are here: Condiments | Dips 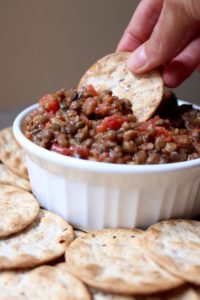 I would say one important thing that is lacking from my life right now is community and oddly enough, this Trader Joe's 2 Ingredient Lentil Bruschetta Dip reminds me of that fact.

While Brett and I currently have a wonderful living situation with Brett's sister's family and while we Skype often with other family members and friends around the world, we don't have the type of community we are used to here in Houston.

Ever since college I feel like I've been a part of a team or a group of co-workers who have also been my best friends outside of work. We would work together then leave work to "play" together.

Since Brett and I usually live in China and are just temporarily living in Houston until we go back, we've found it hard to feel like we are a part of a ground outside of family.

Actually, I'm sure we could make community happen here in Texas, but since we aren't planning on staying here very long, we feel unmotivated to do so. It's hard to start new friendships and it's even harder to want to try to be involved in community when you know you won't be around for very long.

Right before we moved to China, Brett and I experienced probably the best form of community even during our 1 year in New York City. While we didn't live in the city long, that crazy, upbeat and stressful city seems to force people into real life community..or it least that was our experience.

The friends we had in the city were people we could talk about anything and everything with. We'd work together, explore the city together, vent about the smells and the cold shoulders we encountered during the day together and everything in between.

Sharing meals together was also a huge part of our close-knit community and it was during one evening together that I was introduced to this crazy simple and delicious Trader Joe's 2 Ingredient Lentil Bruschetta Dip!

Well, it originally was a three ingredient dip containing feta cheese, but I've just made it plant based by omitting that...and it's still so good! One of my friends in the city was hosting a dinner party and there was this weird looking mixture surrounded by crackers on the table. Since it looked like beans were involved, and since I'm a bean lover, I tried it out.

It was love at first bite! 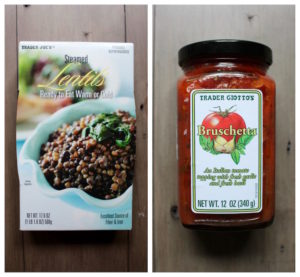 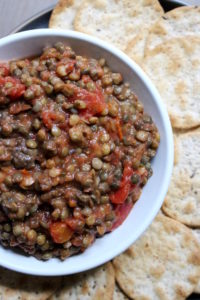 Thankfully my friend graciously shared her secret and let me know that, while the dip tasted so rich and extravagant, it was just two Trader Joe's ingredients thrown together and served with some crackers. Why can't I ever think of these things?!

If you live near a Trader Joe's, I really hope you can give this simple Trader Joe's 2 Ingredient Lentil Bruschetta Dip a try. If you don't live near a TJ's, you can always adapt this concept to use what you have on hand or have access to at your local grocery store. Many grocery stores sell canned lentils which you could drain, rinse and use instead of the Trader Joe's steamed Lentils. There is often jarred bruschetta available near the jarred pasta sauce as well!

If you do give this simple Trader Joe's 2 Ingredient Lentil Bruschetta Dip a try, I'd love to know if you love it as much as I do!

Leave a comment below letting me know your thoughts and how you've been serving/eating it as well. Even better, take a picture and tag @theconscientiouseater on Instagram so that I can see your creation!

Finally, don't forget to rate this recipe in the recipe card! 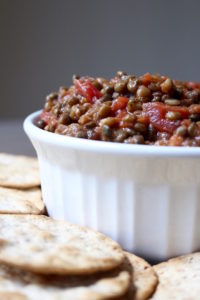 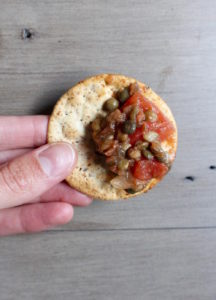