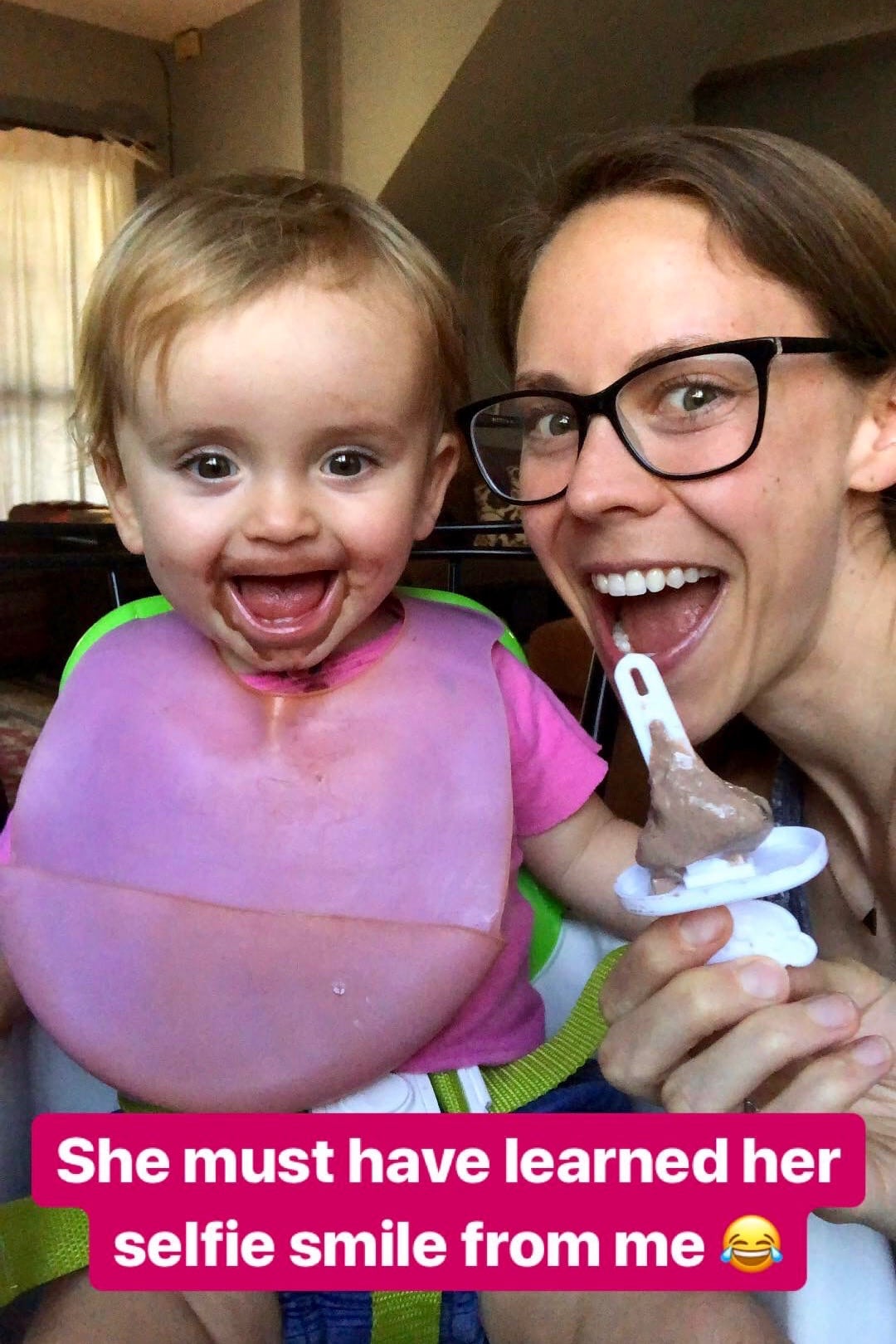 Look at me posting twice this week! Today is a fun post as well because I'm sharing what both Harper and I ate yesterday. I often share "What I Ate in a Day" posts on Wednesdays to give you guys plant based meal inspiration, but usually I just share what I ate. Now that Harper is 1 year old (13 months actually!) and enjoying lots of solid foods, I thought you guys might be interested in seeing what she eats in a day as well. She's thankfully at the point where she eats a lot of the foods we eat. Sometimes, due to different leftovers we have the in fridge we may eat completely different meals, but usually I like for her to eat similarly to Brett and me. It makes my life a lot easier and it allows her to constantly try new foods. Harper is also still drinking breast milk, but I don't include that in today's post. She normally has 3-4 bottles a day depending on our schedule/her hunger levels!

If you want to know more about what Harper eats in a day, please leave your questions down below and I'll try to answer them in future posts!

HARPER: For some finger food, Harper enjoyed a leftover buckwheat pancake smeared with peanut butter which I cut into strips. On the side she also had some homemade, full fat coconut yogurt mixed with berry compote and ground flax seed.

ME: My breakfast was nothing new. I've been occasionally switching up my breakfast, but most days I want my chocolate zoats topped with nut butter, pumpkin seeds and walnuts.

HARPER: I tried to give Harper a snack before her morning nap, but she didn't want anything so she ate a really hearty lunch after she woke up! She had some strawberries (which I cut up after this photo), lentil coconut "curry", red rice with nutritional yeast and some black tahini date bar. She ate almost everything on this plate! I usually try to give her a mix of finger foods and foods that I help her eat with a spoon. Everything except for the lentil curry she was able to eat with her hands.

ME: My lunch was random, but it was what I was craving. I topped some pre-baked Japanese sweet potatoes with a black tahini/berry compote mixture. Definitely a strange combo, but it was good! I then added on some pumpkin seeds and chopped strawberries.

Harper and I have been enjoying homemade popsicles most days in the afternoon. It's winter here in Thailand, but the temperature still rises into the 90s in the afternoon--hence the cold afternoon treats! Today we enjoy some amazing chocolate popsicles with brownie bits all throughout. I'm so so happy with this recipe and I'll be sharing it soon on the blog. These popsicles are made with whole foods and are fruit sweetened, but they taste like ice cream. They'll definitely be a family staple from here on out! 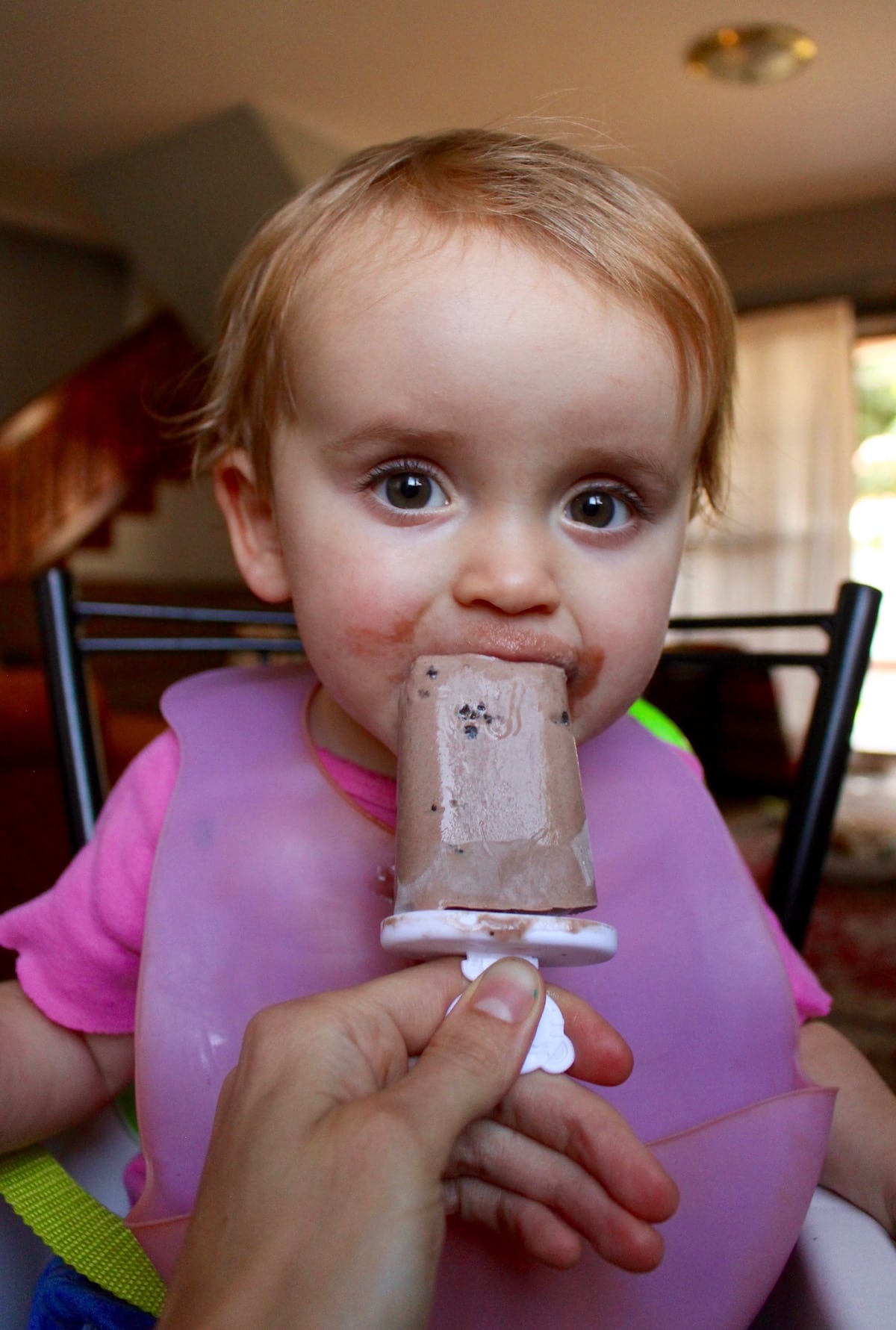 HARPER: Harper enjoyed lots of the same foods Brett and I ate for dinner, just in different forms. She had some buttered whole grain sourdough bread, chickpeas and black beans, veggies from the veggie soup I made and her favorite, tomato!

ME: I made Hummusapians Creamy Broccoli Cauliflower Soup and added chickpeas on top. Then Brett and I had some toast on the side. My toast had roasted tomato hummus and tomatoes on top.

I nibble on food a lot throughout the day as I'm often cooking/baking/recipe testing in the kitchen. Before bed I also had a bowl of weet-bix and muesli with chocolate almond milk for a snack. Harper and I also take different vitamins!

I hope these mom and baby meals give you some inspiration for your week. And definitely come back soon for the chocolate fudge brownie popsicle recipe!