You are here: Home | Christmas 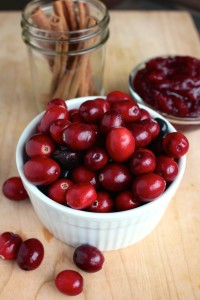 I'm pretty good at this food blogging thing, aren't I? I post Thanksgiving recipes two days after Thanksgiving...after the holiday is over...after everyone's eaten...after the stressful internet recipe searching has ended. Whoops! Good thing Christmas is right around the corner!

Brett and I had a wonderful Thanksgiving. It was our first Thanksgiving spent together without immediate family. It was also my first time really cooking any Thanksgiving dishes on my own. I have never cooked a whole turkey, let alone made stuffing, cranberry sauce, sweet potato casserole, etc., all at the same time. What an adventure!

For a while Brett and I weren't sure who we'd be eating Thanksgiving dinner with, but a couple days before Thanksgiving arrived, four of Brett's English conversation students said they would be able to come over. They are all from China and had never been to an American family's house for a Thanksgiving meal. It was such a treat to cook all day so we could serve them traditional American Thanksgiving Day food. They loved everything and kept putting more spoonfuls onto their plates. After dinner we taught them a game called Fish Bowl before serving pie. What a joy to introduce our international friends to a traditional American holiday! For the meat, I ended up cooking a turkey breast in the crockpot using this recipe. I didn't want a huge turkey taking up most of my oven space and I knew that since this was my first time making everything on my own, I would need to simplify some things. I'm so glad I did too! Gosh, it had been a while since I cooked meat and I'm pretty sure I had a wrinkled forehead the entire time I prepared the turkey breast. There's nothing like peeling off thick, dimpled, turkey skin from a raw turkey breast!

Normally I would want to make everything from scratch, but that just wasn't feasible. I ended up buying the pies (Pumpkin and Apple) as well as the dinner rolls at the store. The rest of the menu was incredible. Angela's Sweet Potato Casserole was the main hit and a close runner up was Megan's Balsamic Roasted Brussels Sprouts! Also on the table was Dana's Simple Vegan Stuffing and of course my Simple Holiday Cranberry Sauce!

Well, I know that Thanksgiving Day is over and you might not be looking for another cranberry sauce recipe, but even though Thanksgiving Day has passed doesn't mean that cranberries aren't still on sale, right? And just because people usually eat cranberry sauce once a year doesn't mean that can't change. Seriously, this Simple Holiday Cranberry Sauce turned out so good that it really should be made on days other than Thanksgiving!

It requires only four ingredients and takes less than 20 minutes to make. I has no refined white sugars in it either. It's so rich, sweet and tart and has the perfect amount of cinnamon laced throughout. It's definitely going to be served at our future Thanksgiving dinners! 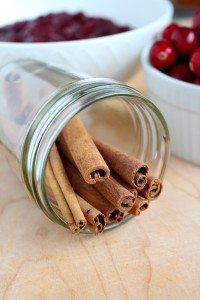 Even though Thanksgiving Day is over, go buy another bag of cranberries and make this Simple Holiday Cranberry Sauce! I'm giving you permission:) 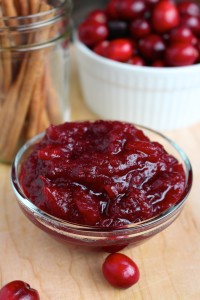 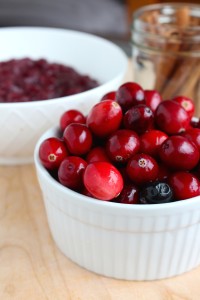 This cranberry sauce turned out so good that it really should be made on days other than Thanksgiving!

It requires only four ingredients and takes less than 20 minutes to make. I has no refined white sugars in it either. It's so rich, sweet and tart and has the perfect amount of cinnamon laced throughout.

Dump the cranberries into a strainer and rinse well. Throw away any soft or damaged cranberries.
Place the rinsed cranberries in a medium sized sauce pan with the remaining ingredients and turn the heat to medium. Cook for about 20 minutes, stirring often, until the cranberries burst and the sauce thickens. You may need to smash some of the cranberries with your spoon if they won't pop.
Serve warm or store in the refrigerator and serve chilled later.