You are here: Breakfast | Scones 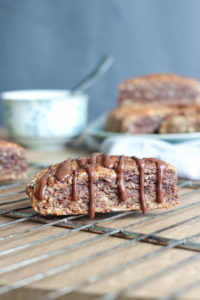 You know how some foods make you think of a past experience or person? Well, these scones bring me back to the day that Brett asked me to marry him. Wanna hear the story?!

Brett is a lover of all things outdoors. So he planned a camping/kayaking trip for us. On a Sunday afternoon we loaded up two kayaks with two tents, sleeping bags, cooking supplies and food and hit a nearby river in Florida. We were in heaven! Having to manuver through fallen down trees, shallow water, and bends in the river was a blast. And the weather couldn't have been more perfect. When the sun went down the moon was so bright we didn't even need to use the lights we packed. We ate some fajitas (before I went vegan haha!) under the stars and slept in our tents on the beach.

We started the next morning with some instant coffee, homemade scones (<--yep, these Vegan Chocolate Peanut Butter Oatmeal Scones are inspired by those scones!) and some quiet time reading.

I had never gone geocaching before, and in case you haven't either, it's basically treasure hunting where you find random objects people have hidden by following the coordinates they provide. Geocaches are all over the country and Brett had two geocaches he wanted us to try and locate along the river.

We kayaked a little ways before pulling up on the side of the river in attempts to find the first geocache. It was a level 4 out of 5 difficulty and after a while of scouring around the coordinates and even climbing a tree we decided to move on to the second geocache.

Now here's where the fun begins.

As we were kayaking to the second geocache location, we actually had an encounter with an alligator. We saw it enter the water just as Brett paddled past it. I, being a hater of dark creepy waters and large swimming creatures, began envisioning the worst and had a minor freak out. At one point I even suggested that we paddle all the way back up stream to the cars. Brett, however, had other plans in mind and eventually helped me gain enough courage to paddle past the spot where we had first spotted the alligator. While both being a little on edge, we managed to make it to the second location.

The second geocache was titled, "Under the V Tree", and it had a clue in the form of a poem which read:

buried with love that no one can measure.

Love from above and love from aside,

Love that the creator isn't afraid to hide.

Find the rope of hope and look inside!"

We got out of our kayaks and began looking for the "V Tree." After finding a couple of trees in the form of a "V" the search for the rope began. Brett soon pointed my attention to a foot of rope sticking out from the sand and I got excited to find my first geocache!

I began pulling the rope...and pulled...and pulled, until up from the sand emerged a plastic tupperware container. EEEEEKKKKK! I was so excited! But even in my excitement, I wanted to make sure Brett got in on some of the fun, so I told him since I pulled the rope, he could open the container.

As Brett was holding the plastic container I could see through to some note cards and I was excited to see what they said. Brett opened the box and handed me the note cards and as I was reading them he slipped the ring he bought me out of the plastic box and hid it behind his back.

The note cards ended up being sweet notes from Brett and I took me until I was reading the last one to figure that out! By the time I had read the last note, Brett was getting down on one knee. You all know what happened next and of course I said "Yes!"

Brett even had one of his friends record the whole event and take a bunch of pictures so we have lots of memories from that day! 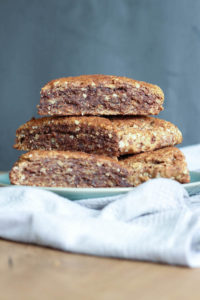 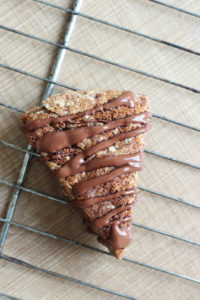 Okay, okay. Enough of the mushy, gushy story. Let's get to these scones! The scones really do bring me back to when Brett and I were dating. I found a recipe for Nutella Oatmeal Scones and after I made them once, Brett and I were hooked and I would often make them for special occasions like our kayaking trip, Brett's bachelor party and long days on the beach. They were so sweet, moist and hearty and these Vegan Chocolate Peanut Butter Oatmeal Scones turned out just the same way!

It really is so easy to turn non-vegan recipes into vegan ones. To change the Nutella Oatmeal Scones into vegan scones I just used coconut oil instead of butter, soy milk and vinegar for the buttermilk, ground up flaxseed and water for the egg, and Peanut Butter and Co. Dark Chocolate Dreams Spread for the Nutella. Seriously, so amazing! 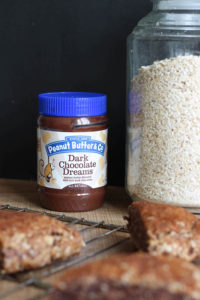 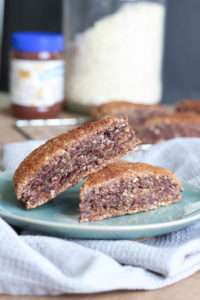 If you're looking for a special treat to make this weekend, these Vegan Chocolate Peanut Butter Oatmeal Scones are a must! If you end up making them, let me know how they turned out in the comments below. Even better, take a picture and tag #theconscientiouseater on Instagram so I can see them! 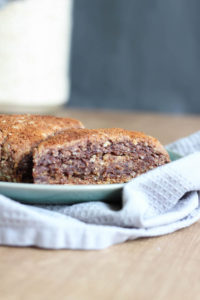 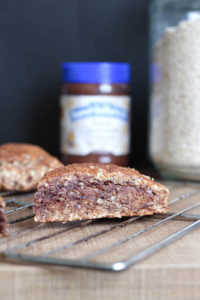 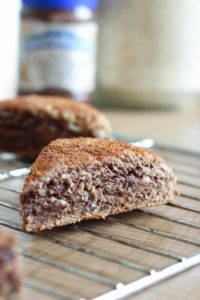 *I haven't made these scones with another nut butter, but I'm sure any kind of nut butter would work!