You are here: Breakfast 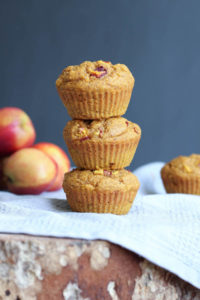 Ever since I started learning Chinese, I’ve been scared that I would accidentally say something super rude without knowing it to a person at the market, on the street, or even one of my Chinese friends. I knew it would happen eventually, but I wondered if I would be aware of what I said or just be rude without ever knowing it.

Well the other day it happened. It was as if I saw the unintentionally rude words flying out of my mouth and couldn’t stop them in time. Thankfully it was just with my language teacher and we had a good laugh about it.

Basically what happened is that my teacher randomly noticed a scar on her wrist that she had never noticed before. She was so shocked and curious as to where it had come from and couldn’t stop saying, “Wow, I can’t remember this scar! Where did it come from? Wow!” In my opinion it was such a tiny, unnoticeable scar, so I tried to make her feel better by saying, “It’s hard to see,” as in, “People won’t even notice it!” Instead, what came out were the words, “Ta hen nan kan!” which means, “It’s so ugly!”

The word for ugly (nan kan) in Chinese literally translates as “hard + see”, or it’s hard on the eyes to look at. So when I tried to say “It’s hard to see,” I accidentally said her scar was ugly. Whoops! Thank goodness I knew right away what I had said and was able to correct my sentence and tell her what I had originally meant to say!

Now the question is, how many times have I said something rude without knowing?! 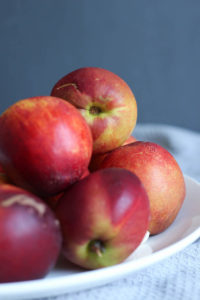 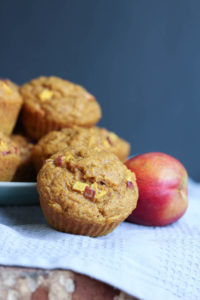 Speaking of Chinese language class, these Vegan Pumpkin Nectarine Oatmeal Muffins are Brett and my current go-to study snack. They’re made fully from oats and whole wheat flour and are sweetened naturally. Then with creamy Homemade Pumpkin Puree and specks of juicy nectarine, these Vegan Pumpkin Nectarine Oatmeal Muffins can also serve as the perfect sweet and healthy breakfast on the go. I know pumpkin is often seen as a fall flavor, but I love it anytime of year, and I hope you guys do too! If you don’t care for pumpkin for some reason, any other squash puree would work perfectly as well.

If you make these Vegan Pumpkin Nectarine Oatmeal Muffins, I’d love to know! Leave a comment below letting me know your thoughts or take a picture and tag #theconscientiouseater on Instagram. 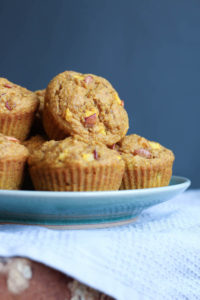 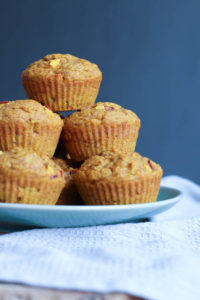 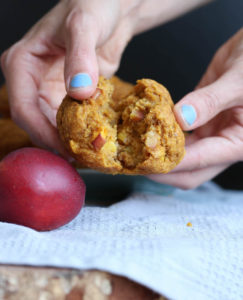 *You can make your own oat flour by putting rolled oats into a blender and blending them up until they turn into a flour.
**You can sub the pumpkin puree with another squash puree.