You are here: Breakfast | Granola

This naturally sweetened Cinnamon Apple Low-Fat Dehydrator Granola is a delicious and easy starter recipe for those new to using dehydrators. 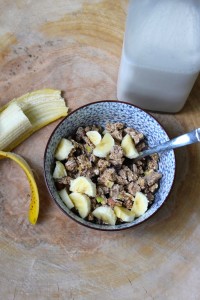 If you walked into my room yesterday, you probably would have seem me with ear buds in and sitting on my bed with a bunch of toy animals, kitchen object and pictures of stick figures sprawled out on my comforter. It may have looked like I was resorting back to my childhood and playing “imagination” with myself, but I was really just reviewing the Chinese I’d learned over the past few days.

And it’s awesome! In just three 4-hour sessions I can already recognize so many words, commands, actions, and objects. How our lessons work is amazingly simple. We usually start the day with our teacher introducing a category of objects to us. She’ll place a toy sheep in front of us and say “sheep” in Chinese a few times. Then she’ll place another toy animal beside the sheep, such as a fish, and say its name in Chinese a few time. Before the third animal is introduced, she asks us in Chinese, “Which is the sheep? Which is the fish? Which is the fish? Which is the sheep?” When she feels confident that we can differentiate between the two animals, she’ll add in another toy animal. This process continues until we’ve learned about 10 different animal names.

Once we’ve learned a couple new categories of words, we usually learn to recognize and do different commands with those new words such as, “Pick up the sheep. Walk to the corner. Lay on the sofa. etc.” So basically, for the past few days my mind has been processing sentences like the following:

“Where is the cow?

Pick up the cow.

Put the cow on the trash can.

Where is the door?

Walk to the door.

Point to the door.

Where is the goat?

Pick up the goat.

Put the goat on the stove.”

While Brett and I really look quite funny as we jump around the room, pick up toys, and point to objects, it truly is amazing how many Chinese words we can already recognize and understand. We’re still not speaking any Chinese yet, but that’s because for the first month of language learning we’re just supposed to listen. The goal is to get our ears to hear the four different tones that are used in the Chinese language before we start speaking them. Hopefully in the long run this will help us to sound less like foreigners and more like local Chinese people.

Now if only my hair were black… 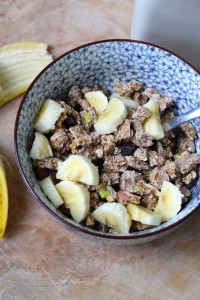 In addition to the hours of language lessons and review I’ve been doing, I’ve also really been enjoying experimenting with my new kitchen appliances, especially my dehydrator! I’ve wanted a dehydrator for a couple years now, but Brett and I thought it would be wise to wait until we moved to China to get one since it would need to run on 240V instead of 110V like in America. Plus, produce is waaaaay cheaper here in China, so I don’t feel bad buying a bunch of mangos or bananas to dehydrate. Score!

Another great thing about my dehydrator, at the moment, is that it’s acting as my oven. Very few Chinese people own ovens, so our apartment didn’t come with one. We’re hoping to get one eventually, but for now I’ve been making due with my dehydrator. It’s working great too as I’ve already made cookies, raw wraps, and this Cinnamon Apple Low-Fat Dehydrator Granola!

This granola came about from me experimenting one day. I used to use coconut oil and maple syrup when I made granola back in the states, but I’ve haven’t been able to find either of those ingredients since we moved here. No worries though. I just get to be more creative! While dates aren’t easy to find, raisins are everywhere so I decided to use raisins to give the granola its sweetness. I also used whole apples which gives this granola a hint of apple pie flavor. Yum! Add in some cinnamon and chopped almonds and you’re good to go.

If you don’t have a dehydrator, I’m sure you can bake this granola in the oven for about 20 minutes at 340 degrees. Just make sure you stir it half way through and watch it carefully so that it doesn’t burn! If you do have a dehydrator, I really hope you try out this easy and delicious Cinnamon Apple Low-Fat Dehydrator Granola. You won’t be disappointed!! 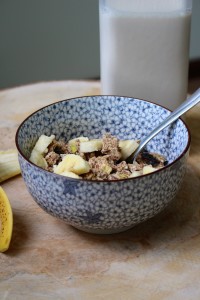 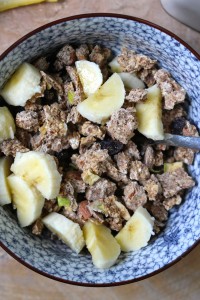 I do not include the soaking time of the raisins into the prep time.