You are here: Desserts | Dessert Bars 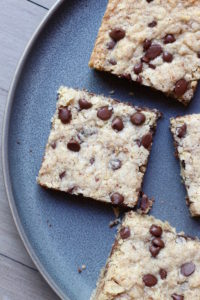 I probably never would have made these delicious Gluten Free Vegan Chocolate Chip Oatmeal Blondies if it wasn't for all the hiccups we ran into getting Harper's passport.

Since Harper birth in mid-January, we've learned a lot about the state of Tennessee and how long it can takes them to process and mail you a birth certificate. We're talking 45+ days of waiting for a sheet of paper. Basically, despite numerous calls and hours on the phone with different representatives, Brett ran into all kinds of poor service while trying to figure out why it was taking over 45 days to get Harper's birth certificate from the state of Tennessee.

"You see sir," said the man on the other line, "we have to handle all the births in Tennessee."

Yes, yes we know. But babies have been born for years. Why don't you have a better system in place by this point?

Anyways, we're still a bit confused as to why things took so long, but Harper's birth certificate eventually came and we were able to move on to applying for her passport.

After submitting her passport application we ran into another bump when the agency called saying we didn't mail in a paper...which we were told specifically we didn't need to mail in.

Okay, no problem. We'll send it right away!

Once the agency received that piece of paper they were able to process Harper's passport application and create her passport. THEN we ran into yet another bump when they somehow mesh together Brett's parent's address with his sister's address and sent Harper's passport to some random address in Tennessee.

Harper's passport was finally delivered to us here in Houston this past Tuesday and Brett was able to get all the paperwork done in one afternoon so that we could apply for her Chinese visa. From what we know her visa is currently being approved and her passport--with the Chinese visa inside--should be returned this Wednesday...and we have flights back to China this Thursday night!

Fingers crossed that we'll be on a plane heading to China in less than 1 week! 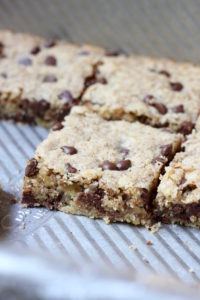 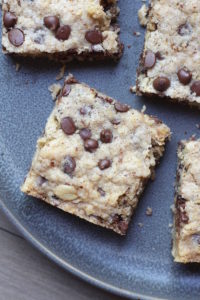 So what does this long, drawn out story have to do with Gluten Free Vegan Chocolate Chip Oatmeal Blondies?!

Well, if we hadn't have run into all these hiccups trying to get Harper's passport and visa, I wouldn't have still been in Houston when three of my best college friends were also in town. One day my good friend texted me asking if I'd still be in town the week of April 9th and if I'd want to get together.

So this past Wednesday, three of my best friend--two of whom also brought their daughters--came over for an overdue reunion of sorts. I put together a Mexican buffet and made these Gluten Free Vegan Chocolate Chip Oatmeal Blondies for dessert, because one of my friends can't eat gluten.

I've never been the greatest at gluten-free baking and it's honestly always intimidated me. But I went for it and these Blondies turned out amazingly! Brett couldn't stop telling me how good they were, as well as the girls! They're sweet and oat-y and full of melt-in-your-mouth chocolate morsels. They're completely gluten free and vegan, but no one would ever know! They didn't last long in our house and I was so glad my gluten-free friend enjoyed them too!

I'd love to know if you give these Gluten Free Vegan Oatmeal Chocolate Chip Blondies a try and what you think! Leave a comment down below or tag @theconscientiouseater on Instagram so I can see your creation! 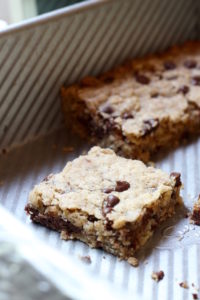 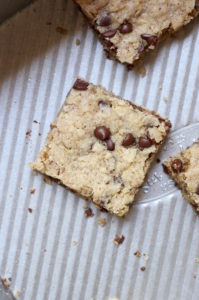 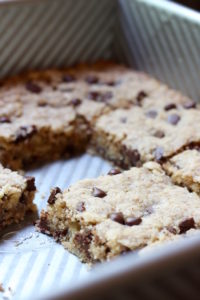 *If you don't have gluten-free quick cooking oats, you can easily process normal gluten-free rolled oats into quick outs by using a food processor