I have a lot of people in my life that have been pregnant or are pregnant. Even before Brett and I wanted to start having kids, I was always interested to hear what pregnancy was like for them. I even enjoyed reading random stranger's blog posts on what each week was like for them as their pregnancy progressed. Did they have morning sickness? Were they able to exercises like they used to? What things did they have to stop doing?

The more women I talked to the more I knew I would have to go into pregnancy with an open mind. Yes, I would love to continue eating healthy and exercising for as long as possible, but I knew that it was a definite possibility that hormones or health issues could get in the way. I didn't want to go into pregnancy with super high expectations that I would be able to do everything I used to do (with modifications of course) and then hit a bump in the road and be super discouraged.

Thankfully, when it comes to exercise, I've felt really good my entire pregnancy. Even during the first trimester when I was exhausted and nauseous a lot of the time, I was still able to find pockets of time during my day when exercising sounded and felt good.

When I first got pregnant I was on a break from running after training for a half-marathon back in the fall. I would occasionally go on a short run when it sounded good, but otherwise I was enjoying walking and hiit workouts. After I found out I was pregnant, walking still felt great, but I would get winded so easily doing simple body weight exercises at home. I tried to continue doing my usually hiit workouts for a bit (with modifications and less intensity if needed), but eventually I felt like less intense workouts would be best. That's when I switched over to weighted workouts and running.

I have honestly felt so healthy and energetic since the nausea of the first trimester has pasted. I'm thankful I was able to find windows of time to continue working out during the first trimester so I could keep my fitness up and enjoy exercising even more once I entered the second trimester.

One thing I've found that works great for me is including walking breaks during my runs. My sweet spot is running for 4 minutes and then walking for 1 minute. Sometimes I'll skip the walking break if I'm feeling good, but usually the walking break allows me to fully enjoy my run and run for farther distances. I'm even considering run/walking a ½ marathon in November if my body is up for it, but I'm holding that dream with an open hand.

As for what it's like running as a pregnant woman in China...

In Chinese culture, pregnant women are supposed to only do light exercising like walking. Lifting weights or running during pregnancy are completely foreign concepts in my city, so it's been funny to see my friend's reactions when they find out how active I am and that I'm still running. While they're surprised most Americans think that exercising/running during pregnancy is a good thing, my friends have actually been fairly accepting and open-minded of my choices. And thankfully most strangers on the street can't tell I'm pregnant yet so I don't get any stares or confused looks from them.

While running has made me feel amazing this entire pregnancy, I can feel changes happening in my body as the weeks go on. Last week I officially entered the I-have-to-pee-all-the-time-phase so that definitely forces me to run in the public park near our house which has bathrooms along the way. I've also noticed that when I first start running I feel like I have a heavy weight in my pelvic region, but thankfully that quickly goes away.

As for nutrition, I'm basically just eating when I'm hungry and stopping when I'm full. When I go on a long run, I actually don't have an appetite the rest of the day, so it can be hard on those days to eat enough. I usually don't and then find myself extra hungry the next day.

Today I'm sharing with you what I ate on a longer-run day.

I made a ⅔ batch of my 2 Ingredient Blender Pancakes and topped them with peanut flour spread, a little leftover banana, and a sprinkling of granola. Since getting pregnant, I actually feel so much better and have more energy on my runs if I eat a fairly substantial meal not long before I start my run. I honestly had no appetite after my run and felt like I was back in the 1st trimester again when nothing sounded good. I eventually gave up trying to think of the perfect post-run fuel and just went with what sounded edible. I topped two Weetabix with cashew butter, a sliced banana and some raisins. It was a pretty "ehh" snack, but at least it got some energy in me. 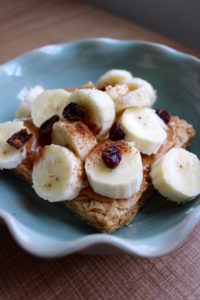 Lunch was the last of the green curry I had made for the week with brown rice and a random dollop of my favorite hummus, which helped to tame the spice of the curry! I had an apple on my way to class and after class enjoyed an Chocolate Energy Bite. I always have energy bites in the fridge. Brett and I love having them for snacks throughout the day or as a little treat before bed. 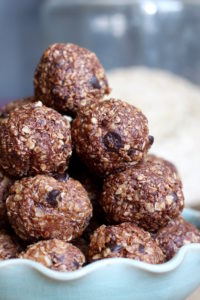 Dinner was amazing! We had some friends over and I made us all Fajita Bowls complete with Homemade Roasted Blender Salsa, Fajita Vegetables, Vegan Sour Cream, Mexican Pressure Cooker Black Beans, white rice and lettuce. Ah, this meal was so delicious and filling. The sour cream took it to the next level. While watching a movie I had some black tea and a square of 90% dark chocolate.

That's everything I ate!

Have you ever run/walked before?

What is your favorite way to exercise?

Thanks Laura, Jenn and Arman for the link-up!