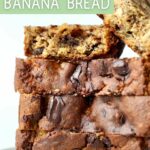 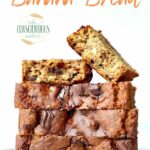 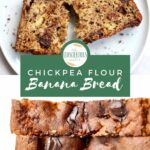 This recipe is also featured in the following vegan recipe roundups:

It's no joke that I make a loaf of vegan banana bread almost every week.

I always buy tons of bananas just so that they can ripen and be turned into a golden loaf of deliciously, sweet banana bread.

I've shared a number of vegan banana bread recipes on the blog over the years.

HOWEVER, today's recipe for Chickpea Flour Banana Bread may take the cake.

It's sweetened almost entirely with bananas, is gluten-free AND higher in protein thanks to chickpea flour.

What's not to love?!

I'll list out all of the ingredients you'll need to make this Chickpea Flour Banana Bread below:

This recipe calls for two ingredients you may have never baked with before: aquafaba and chickpea flour.

Aquafaba is simply the liquid from a can of chickpeas and it's going to act as the eggs in this recipe.

What is Chickpea Flour?

Chickpea flour is what you'd guess it to be: ground up chickpeas!

One thing to keep in mind when baking with chickpea flour is that it doesn't taste good raw. If you lick the batter of this banana bread before baking it, you'll be grossed out.

Don't worry though, it tastes amazing once baked!

Can You Substitute Chickpea Flour for All-Purpose Flour?

I'd recommend using only ¾ cup of chickpea flour to substitute 1 cup of all-purpose flour.

While chickpea flour is high in carbohydrates, it also contains a hearty dose of fiber and protein.

Per cup, chickpea flour has triple the amount of fiber than white flour and has 20 grams of protein compared to white flour's 13 grams.

Additionally, it's high in many vitamins and minerals including folate, iron and manganese.

How to Make Chickpea Flour at Home

If you can't find chickpea flour, but have dried chickpeas at home, you can make your own chickpea flour by using a grain mill or high powered blender.

If using a high powered blender:

Okay, now that you know all about my current favorite ingredient--chickpea flour--get baking!

How to Store Leftover Banana Bread

If you happen to have any leftover vegan banana bread (which I doubt you will), you can either refrigerate it or freeze it.

Fridge: If you'll be finishing off the banana bread in less than a week, simply store it in an airtight container or zip-lock bag in the fridge. When you want to enjoy some, just slice off a piece and dig in!

Freezer: You can also freeze any leftover banana bread if you want it to last longer or if you happen to make two loaves at once. To freeze an entire loaf of banana bread, wrap it tightly in plastic wrap before placing it in a large zip-lock bag to freeze for up to 3 months.

To thaw frozen banana bread, remove it from the freezer the night before you need it and allow it to thaw overnight in the fridge.

*Aquafaba is the liquid in a can of chickpeas.
**Chickpea flour can also be called garbanzo bean flour, gram flour and besan flour. Chana is also chickpea flour, but the chickpeas have been roasted. Use unroasted chickpea flour!
This recipe was adapted from Ambitious Kitchen.

This recipe is part of my Vegan Banana Bread series: