You are here: Breakfast | Oatmeal 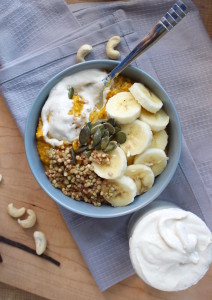 A season of walking has officially commenced.

As many of you know, this clumsy girl fell off her bike a couple weeks ago and injured her arm. It's healed tremendously since that fateful Monday, but it's still not fully usable and I can't straighten it fully. Hopefully that will change soon, but until then my love of running and weight lifting (a.k.a. 10 lb. dumbbells) has been put on hold. The rest has been nice, but I crave fresh air and movement most days so walking has become my go-to thang.

During Brett and my first year of marriage when we lived in Florida, most mornings I would walk around UCF campus right across from our house. I loved moving my body early in the morning to wake me up and the fresh air and quiet just suited me. I would think, pray or listen to podcasts and would come home so refreshed and alert.

That routine came to a halt when we moved to Queens, NY for a few reasons. We lived in a city that many people would call sketchy and once October rolled around it was too frigid in the mornings for me to find walking enjoyable. But fast forward to today and I now living in a very safe, quaint city in China with an injured arm and walking has now reentered my life.

Our city is so still and quiet in the mornings before the sun rises, which is now around 7 AM. Aside from students walking to school or venders setting up their stalls, most people's houses are still dark and quiet. It's a common belief/practice in certain areas of China that you shouldn't rise before the sun. Most people adjust their schedules to match the seasonal changes, so now that winter is approaching, the mornings here are extra quiet.

Since I'm often stared at when I leave my house (I'm hoping that's because of my white skin and blonde hair and not because I'm oblivious to some toilet paper stuck to my shoe or something), I've found that taking an extra long walk on my way to class is so relaxing and enjoyable for me. The mornings are crisp and dark so the air helps me wake up and I love that people don't notice me as much. My language review has also increased by leaps and bounds, because I listen to my language recordings while I walk and I can focus better on the new vocabulary words and grammar structures that I learned recently.

Basically, it's a win win. I'm finding an enjoyable way to get exercise and I'm also reviewing my Chinese so much more.

This multi-tasking addict is happy.

But enough about walking (seriously, I don't know why I tell you guys these random things about my life). Let's talk about OATMEAL! 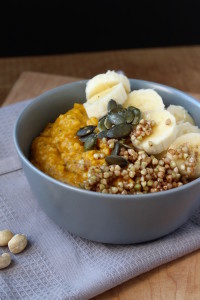 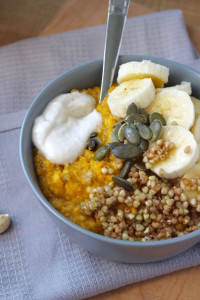 Now that the weather has cooled down I've been eating oatmeal most mornings for breakfast. We don't have A/C or heat in our apartment (as is the case with most apartments around here), so the temperature of our house is often quite chilly in the mornings...actually, the entire day. I'm amazed that, with the amount of oatmeal I eat, I haven't posted more oatmeal breakfast recipes. I make oatmeal so often that I never feel like it's anything special, but a couple weeks ago, I took the time to make an extra special weekend breakfast and thought you all might like to try it!

Since it's November, I'm sure you knew that pumpkin would be involved. It's so cheap to buy pumpkin here, and so quick to make Homemade Pumpkin Puree, that I've been making pumpkin everything (as I'm sure you're fully aware of considering the recipes I've been posting.) Easy Vegan Pumpkin Muffins, Pumpkin Hummus, Pumpkin and Carrot Curry, Banana-Less Pumpkin Pie Smoothies, and now this Pumpkin Oatmeal with Caramelized Buckwheat and Cream. Yerp, it's delicious.

As you can see, I included recent recipes, like my Maple Vanilla Cashew Cream and Caramelized Buckwheat Groats, in this recipe. While I think this combination is amazing, you can easily adapt it to use what you have on hand. Granola, coconut cream, and chopped pecans would be amazing substitutions! 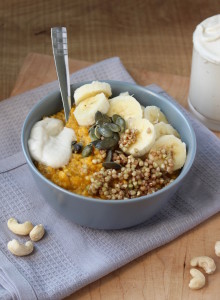 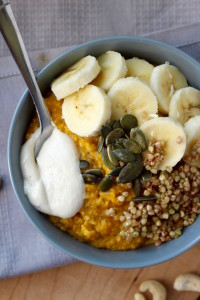