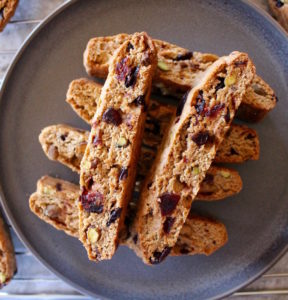 Does a recipe for Vegan Cranberry Pistachio Biscotti get you as excited as me?

I’m one of the people who loves it and I especially love it in the colder months when I’m often sipping on some tea. They just pair so perfectly together!

I’ve definitely been in the baking mood ever since we finished our Thanksgiving travels. It’s so nice to have tons of free time to come up with recipes, make a mess in the kitchen and then have time to clean up after myself.

I’ve also recently become obsessed with The Great British Baking Show. Do any of you guys like or watch that show? I’ve always loved watching cooking shows, but there is something extra special about the The Great British Baking Show. Everyone is just so kind and genuine and I think the two Emcee’s are hilarious. Plus I feel like I’m learning lots about the science of baking too. So it’s educational, right? 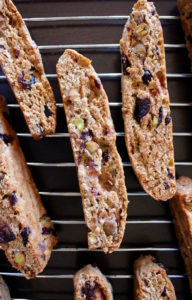 I don’t think I ever made biscotti until I moved to China and I’m not sure why I waited so long. I guess biscotti always intimidated me for some reason. Biscotti basically means a cookie that has been twice-baked and there really isn’t anything much more complicated about making them. You first press the dough into a long, rectangle shape and bake it at a lower temperature than you would for regular cookies. Then you remove the log from the oven, allow it to cool for a bit, and then cut it into long, rectangles. Those rectangles then go back in the oven at an even lower temperature until dry and crisp. They’re perfect for dipping in tea and I find that they aren’t as sweet as regular cookies. So they’re perfect anytime of day!

These Vegan Cranberry Pistachio Biscotti are the second biscotti recipe I’ve shared on my blog. I also have a recipe for Vegan Pumpkin Chocolate Chip Biscotti, which I’m obsessed with, so be sure to check it out if those flavors suit you more! 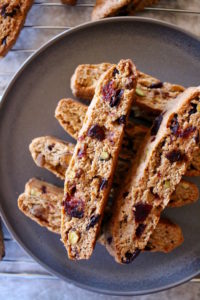