You are here: Cuisine | Indian

Made rich with creamy cashews and fragrant spices, this hearty Vegan Seitan Tikka Masala will impress even your meat loving friends! The day this Vegan Seitan Tikka Masala came into fruition my evening plans went from being a relaxing night with one friend, to being a full day where I was rushing around trying to figure out what to feed 8 people for dinner.

If you follow me on Instagram, you may have heard parts of this story from my insta-stories, but basically I was home alone a lot last month. Brett was out hiking with his friends and I wasn't expecting him home until Saturday. On Tuesday my friend and I had planned to cook dinner together the next day and attempt to make Vegan Tikka Masala using seitan, something I had never done before. We were gonna make one dish and enjoy a chill night together over a meal and probably watch a movie afterwards.

However that Tuesday night Brett texted me saying that he and his friends would be back the next day around dinner time, just when my friend and I were going to be having our girl's time. My friend and I decided to pick out some more indian recipes and make a feast for everyone. 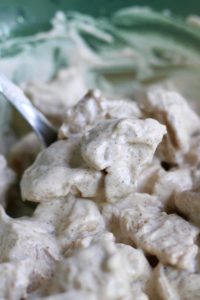 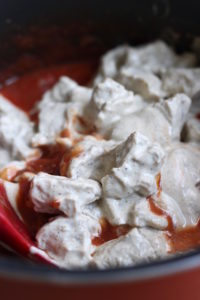 I have a fear of cooking new recipes for people that I'm hosting. Somehow it still ends of happening cause I love experimenting, but it still makes me nervous to serve a recipe I'm not confident is delicious. I get especially nervous when I serve overtly vegan food, like seitan. I've only cooked with seitan for Brett and I and I had never served it to guests, so I was worried that they would think it was the strangest thing ever.

But as my friend and I started preparing this Vegan Seitan Tikka Masala and as the sauce was bubbling on the stove, I knew it would be a hit. The sauce itself is so rich and fragrant and the sour cream marinated seitan adds a subtle tanginess to the dish. My friend who helped me cook dinner especially loved the seitan and everyone else gave it a big thumbs up. Even my very non-vegan guy friend said it was almost believable as real meat.

This dish seems complex and tedious, but it is easier than it looks, especially if you can get your hands on store bought vegan sour cream. If not I used this vegan sour cream recipe from Oh She Glows and it was spot on. I also think hearty vegetables like king oyster mushrooms or cauliflower could be used in place of the seitan. Get creative and use this delicious Tikka Masala sauce as a base! 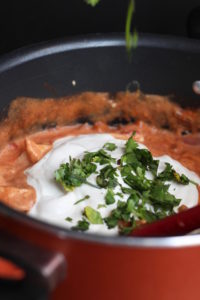 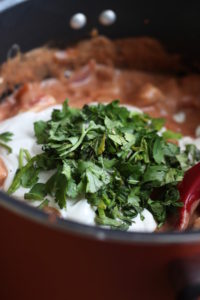 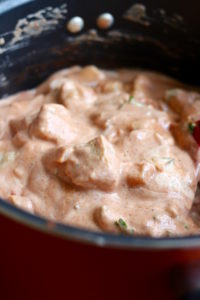 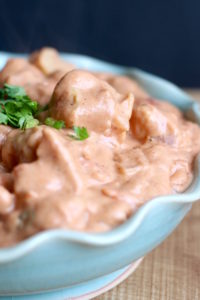 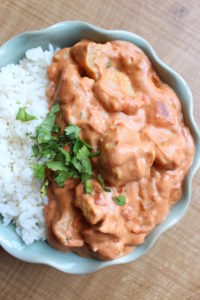 *If you don't want to make seitan, you could try using chopped up king oyster mushroom or cauliflower florets.