You are here: Home | Roundups

It's that time of year again!

Let's celebrate with some good food!

We all love the warm summer months, but the autumn season is always a welcome change. I'm sure you know what I'm talking about!

Kids are back in school and into a routine. The leaves are starting to change colors and you're finally getting to pull out those cool-weather clothes that have been sitting in your closet untouched for the past year.

It's also a great time to open up your cookbook and try out some great vegan fall recipes that you haven't seen in a while!

In addition to listing out a few of my favorite recipes for the fall season, I also want to help you by showing you how I meal prep some of these delicious fall recipe favorites. I'm sure your time is limited just as much as mine is, so it helps to find ways to cook in batches so you're not always scrambling to figure out what you're going to cook every evening.

For this reason, I'm going to start with some plant based fall meal prep ideas and then move into some great fall recipes. I hope you enjoy!

Although I've already shared with you some of my favorite vegan pumpkin recipes, below I want to provide a bit more variety.

These are recipes that go beyond one single ingredient (like pumpkin) and cover meals for any time of the day.

Nothing says "fall" like the enticing smell of a vegan pumpkin chili! This makes for an amazing dinner that your whole family can enjoy!

Not only is this chili recipe vegan, it's also a gluten-free! That is, of course, unless you add some good cornbread to it...

Whether served with a vegan chili or some other recipe, having a warm cornbread on the table always seems to round out a good meal. This creamed corn cornbread is one of my favorites.

A good, plant based cornbread pairs well with chili, obviously. But it can also be a great addition to a variety of different soups.

In addition to the bold flavors you'll get in this tomato zucchini soup, it also happens to pack a a great nutritional punch!

For me, there's nothing quite as satisfying as a hot bowl of soup on a chilly fall evening!

One great way to make sure you and your family eat your vegetables is with a pot pie like this. In addition to butternut squash, the recipe also calls for onions, leeks, mushrooms and peas. It's so delicious!

Even though this vegan fall recipe is meatless, you'll find that it's hearty enough for any omnivore in your family!

If you're looking for a lighter vegan fall recipe that is still rich in protein, this quinoa, kale and butternut squash salad should do the trick!

Don't you just want to dig into that salad!?

I simply love this vegan lentil dal recipe I found on the Plantings + Pairings blog! It takes advantage of your pressure cooker such as the Instant Pot to make meal prep super easy!

If you watch my fall meal prep video further down this article, you'll see that I make this recipe and then add coconut cream at the end.

I've enjoyed using squash to create dishes that you normally wouldn't associate with the vegetable. Such is the case with this vegan fall recipe that makes a great substitute for cheesy broccoli casserole!

Best of all, this fall recipe only requires about 15 minutes of prep time!

If you like the pumpkin scones you can buy at Starbucks during this time of year, you're going to love this vegan version that offers a similar burst of pumpkin flavor!

To create that classic scone flakiness, instead of using butter, this vegan version uses coconut oil. It makes for a great, plant-based substitute!

And since we're already talking about Starbucks here...

Obviously, the Starbucks pumpkin spice latte isn't vegan - not even close. So how can you create something similar without paying $5 per cup? Enter the...

Even if you don't have "pumpkin spice" in your pantry, this recipe shows you how you can recreate the taste using other ingredients.

A list of the best vegan fall recipes just wouldn't be complete without a couple of amazing desserts. This apple crisp topped with either non-dairy ice cream or homemade coconut whipped cream is amazing!

This is another healthy vegan dessert that uses mashed sweet potato with maple syrup to create a tasty flavor. If you love chocolate, this recipe is definitely worth trying.

I mean, you could just have sweet potatoes...

...but wouldn't you rather have brownies?

These fall recipes are only as good as your time and ability to make them in your own kitchen.

Below I want to share with you two helpful resources:

First, take a few minutes to check out how I did meal prep for my family this last week.

Get more great videos on The Conscientious Eater YouTube Channel!

Each of the vegan fall recipes mentioned in the video have already been linked to above.

If you're the kind of person who would rather download and print the list of recipes here, I've also compiled them into a simple PDF that you can get here:

I hope you have a wonderful autumn, one that is full of beautiful family time and wonderful vegan food!

Oh, and one more thing - if you happen to cook any of these vegan fall recipes in your own kitchen, I'd love to see the pictures of your creation! 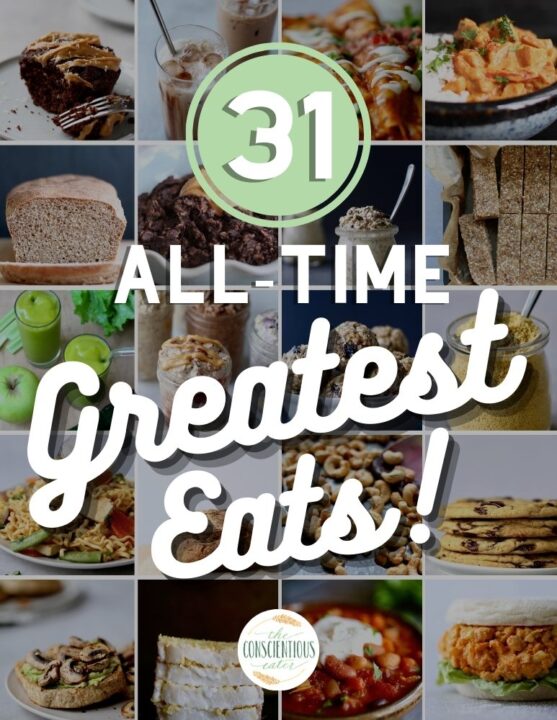