You are here: Desserts 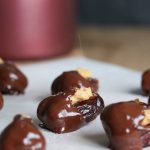 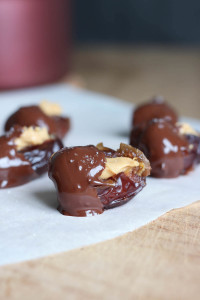 Like lots of American kids, I chose to study Spanish in high school and college. I actually got pretty good at it. I wasn't fluent by any means, but it came in handy whenever I was in a Spanish speaking country, which happened to be often when I was growing up.

One thing I didn't expect to happen when I started getting better at speaking Chinese is that all my Spanish would fly out the window. At first, the Spanish I knew made learning Chinese super hard. Any Chinese words that I heard which had the same pronunciation as a Spanish word, made me think about the Spanish meaning and not the Chinese meaning. For example "yo" means "I" in Spanish, but in Chinese "yo" (written you) means "to have". So whenever I would hear "yo" in class I would automatically think "I" and would end up being super confused.

BUT...now that my Chinese has improved by leaps and bounds since we first moved here, I have completely forgotten my Spanish.

In fact, to write the above paragraph I had to use google translate to remind myself how to say "I" in Spanish! The only way I can remember the basic Spanish phrases which I thought I could never forget--such as "Where is the bathroom" and "How are you"--is if someone else says them or I use a dictionary. It's kind of depressing. But also kind of encouraging, because it shows that my brain truly is in Chinese mode.

It's kind of hard to explain, but I hope that once my Chinese is closer to fluent, I'll be able to spend some time re-learning my Spanish. It would be so sad to waste all those hours of studying and I would really, really love to be trilingual someday! 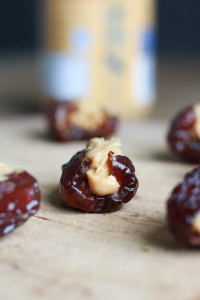 But enough about my language struggles. Let's talk about these incredibly simple, 5 INGREDIENT, chocolaty, chewy, salty and sweet Salted Chocolate Covered Peanut Butter Stuffed Dates! (Wow, that was a mouthful!) I've been wanting to make these for quite some time and I know for many of you, this concept isn't anything new. But these Salted Chocolate Covered Peanut Butter Stuffed Dates really couldn't be easier to make or more delicious. The chewy sweet dates act as the base and then you stuff them with creamy, nutty peanut butter (or whatever nut butter you like really), cover them in rich, dark chocolate, and sprinkle a hearty pinch of sea salt on top.

These took me less than 15 minutes to put together and were gone in a day. All my friends gave them a big thumbs up, so I know they're a winner! I really hope you can give these incredibly simple Salted Chocolate Covered Peanut Butter Stuffed Dates a go. If you end up making them, let me know your thoughts in the comments below or take a picture and tag #theconscientiouseater on Instagram so I can see your creation! 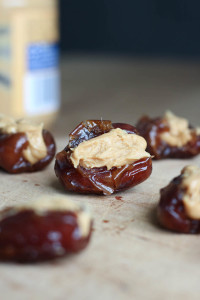 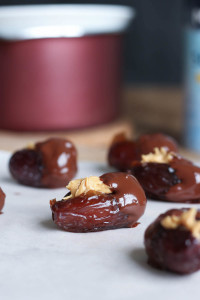 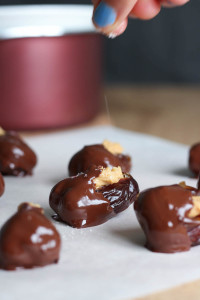 *If you want to cover the dates completely in chocolate, use about 2.5 oz. of dairy free dark chocolate.