You are here: Snacks | Energy Balls

Made with raw almonds, sticky dates, and flaky coconut, these Vegan Almond Joy Brownie Bites are a healthy and delicious way to satisfy your sweet tooth!

This post is also featured in my Easy Plant Based Breakfast Ideas For 2020 roundup. 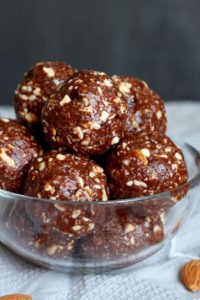 Participating in a running race in China is unlike any other experience. The enthusiasm, number of selfies, and acceptance of all ages and abilities is unmatchable. If you ever want to get a deeper insight into Chinese culture, definitely try to attend a running race! Saturday morning I (praise the Lord!) completed my 2nd half marathon after many previous attempts in the past. It was also my first time running a race in China and I SO wish you guys could have been there to experience all the excitement. But since you couldn’t fly all the way across the world to cheer me on, I might as well give you a little race recap.

Due to some pesky mosquitoes flying around our head, Brett and I had a bad night of sleep the night before the race. We ended up getting out of bed about an hour earlier than we had planned, but that turned out to be a good thing. When I went to put my race number on my shirt, I realized that they had given me a bib for the 5k race. So after hydrating, eating a little snack and doing other business (ahem…), we decided to leave our house early in hopes of getting my bib switched. If I didn’t get my bib switched they wouldn’t let me run the half marathon and that would have been so sad!

We walked from our house to the start of the race and the crowds were already building. We asked around, trying to find someone who could help us switch our bib, but in the end they said it was too late. If I had discovered the mess-up the night before, they could have helped me. Thankfully, Brett was given two bibs, one with a chip and one without, so he just gave me his second bib. I knew I could track my own time, so the fact that I didn’t have a chip wasn’t a big deal, I just wanted to make sure I could run the half marathon that I had trained so long for!

What really makes Chinese culture stand out is what happened before the race and right after it started. In America, most people are doing their own warm ups and stretches in order to prepare for the race. They’re getting in the “zone” and trying to stay focused. In China, however, everyone gathers together to warm up…so we joined in! They dance, they jump, they cheer, they take ALL the pictures, and everyone is so excited to participate in such a fun experience.

Individual race time isn’t the goal. Having fun with friends and making memories is the goal.

The race started at 8 AM and Brett and I ended up getting split up so I started the race by myself. Except, it’s impossible to do anything by yourself as a foreigner in China because everyone wants to get their pictures taken with you. So even after the bell sounded and the crowds of people were shoving their way to the starting line, I was still stopping to take pictures with people. After a few group photos though, I put my headphones in and ignored the stares.

If you’ve ever been to China, then you know orderly lines and taking turns isn’t a thing. So as you can imagine, thousands of enthusiastic Chinese people starting a running race was pretty chaotic. I felt like I was being smooshed between a herd of animals.

On top of the crowdedness, remember what I said about Chinese people being enthusiastic?! Well, not long after I crossed the starting line and was carefully trying to weave in and out of the groups of people in front of me, I also had to be careful for the people who stopped every 10 steps to take a selfie…or talk to their friends on the sidelines…or give little kids a high-five. Running at a certain pace was not a goal for 99% of the people (at least that’s what it seemed like), but taking pictures and making memories was what was most important.

What a difference from our individualistic, goal-oriented Western culture!

All that to say, my first mile was my slowest (almost a 9 minute mile), but soon after that the crowds started to clear up and I could pic up my pace. I won’t go into detail about every mile, thought and cramp I had, because I don’t think I remember that much! I always start my long runs and races listening to a pod-cast. They help me not get too excited and maintain a steady pace. My goal for this race was 8:15 minute per mile pace and I was thankfully able to make up for my slow start in the following miles.

Overall, I felt great throughout the race. I quickly made up for my slow start and by mile 3 or so was running an 8:08 average pace. I was definitely tired and had some minor pains occasionally, but the traditionally dressed women on the side lines cheering us on and the random strangers that gave me thumbs up while I ran really helped to encourage and distract me. I was also able to run past a few of my foreign friends along the way, so it was fun to see them and not feel so along.

The hardest miles for me were mile 10 and 11. By this point I was having some pains in my feet and the sun had come out and was shining in my eyes. One of the last legs of the race was an out and back stretch. The out part never seemed to end and I couldn’t wait to turn around and complete the last stretch of the race. After turning around and starting the last leg of the race, Brett ran up from behind and said he was feeling great and on pace to do sub 8 minutes miles (and this is with him only getting a 9 mile training run in!). I started to keep pace with him, but then let him go off ahead of me.

Thankfully the last mile was slightly downhill and the sun was on my back. I prayed and asked for energy to finish strong and that’s exactly what happened! The last 1/2 mile was painful, but I increased my pace and finished in what felt like a sprint (although I’m sure I looked like a dying animal!)

I crossed the finished line at 1:44 and ended up doing a sub 8 minute per mile pace, which was a lot faster than my goal of 8:15 minutes per mile! I felt slightly sick right after I stopped, but I was just so happy to have run a good race and finish strong. 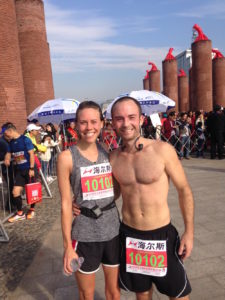 For probably 2 hours after the race we waited around for other friends to finish, got interviewed by a Chinese TV station and took picture upon picture with random strangers. We even signed our signature for some young girls!

Lastly to celebrate, a bunch of the foreigners in town went out for Chinese feast and just enjoyed time together.

Overall it was such a great race experience and I’m so glad I completely the training!

After lunch we came back home, showered and rested before going out to do social things later that afternoon. These Vegan Almond Joy Brownie Bites were the perfect sweet treat to have throughout the afternoon. I’m usually not very hungry after a long race, but if I don’t eat I get a headache and end up ravenous the next day. These Vegan Almond Joy Brownie Bites pack a lot of energy and taste really decadent while being made out of whole, plant foods!

Almond Joys were always one of my favorite candy bars growing up, so these Vegan Almond Joy Brownie Bites are a fun way for me to blend two of my favorite ingredients, coconut and chocolate, together into one gooey, chocolatey, rich brownie bite. I love these brownie bites as a snack after a long, tiring language class or as a healthy dessert to satisfy my sweet tooth after dinner.

I really hope you give these simple Vegan Almond Joy Brownie Bites a try! If you do, please let me know your thoughts in the comments below or tag #theconscientiouseater on Instagram so I can see your creation! 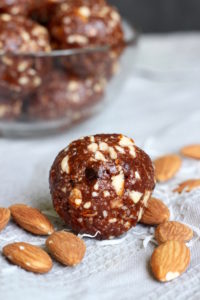 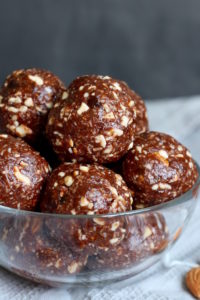