You are here: Homemade Vegan Recipes

This sweet and flavorful Crockpot Persimmon Applesauce is a perfect side dish warmed in the winter or as a cool snack in the summer. It’s a must try! 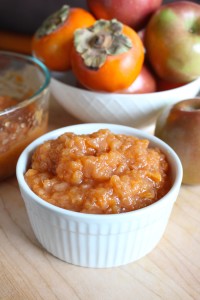 Until I made this Crockpot Persimmon Applesauce, I held a grudge against my crockpot. I never cooked much with crockpots as a single, mainly because I didn’t own one, but was so excited to start experimenting after Brett and I got married. Yes, Brett owned a crockpot and I didn’t. But in my defense, I’m pretty sure the only time he used it was when his mom and sister came to visit and bought one for him.

Anyways. The first recipe I tried making using our crockpot was and Indian Chicken Lentil dish. I was so excited to come home after a long day of work to dinner already prepared and hot. But when I opened up the lid to check on the food, everything looked like a brown mushy mess. I know lentils can be finicky, but I hadn’t even let the food cook for as long as the recipe called for. We still ate it for dinner, but I’m pretty sure we threw away the leftovers. I was disappointed with the results, but learned a valuable fact: I’ve got one heck of a powerful crockpot! 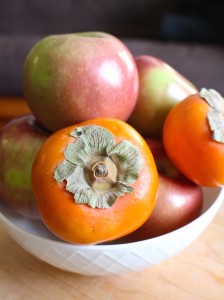 That experience put me off from using our crockpot again until almost a year later! It was actually just a month or so ago that I decided to give it a second chance. This time I tried to make steel cut overnight oats. I knew I wouldn’t be getting 8 hours of sleep so I figured I would be able to turn off the crockpot a couple hours earlier than the oats were supposed to cook. But again, when I woke up, the inside edges of the crockpot had a burnt rim of oats plastered to them. Oy vey! We were able to salvage the middle section of oats, but I knew that the next time I used my crockpot I would have to watch it like a hawk…which defeats the point of a crockpot if you ask me.

Last week I discovered Sally’s recipe for Easy Crockpot Applesauce that looked so simple that I knew I’d have to get over my crockpot cooking fears and give it a whirl. I decided to make it on an afternoon when I’d be home the entire time. That way I could check the apples often and stop the cooking process when they were done. I peeled, cored and thinly sliced 8 fuji apples, dumped them into my crockpot and squeezed the juice of one lemon overtop. Then I added in some water and vanilla, crossed my fingers, and turned the crockpot to high. The recipe said the sauce would take about 4 hours to cook, so after 2 hours I decided to take a peek. Other than a few apple slices that were stuck to the edge, everything looked good! I pushed down the stuck apple slices and let everything simmer another hour before checking again. Done! I mashing the apples with a potato masher and took a taste… 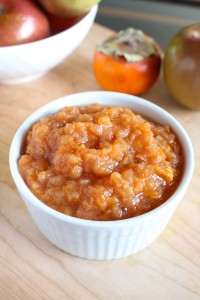 Who knew some cooked and mashed apples could taste so rich and sweet!? I took another taste and then made Brett take a taste. Wow. Seriously, crockpot applesauce is my new favorite food. I don’t know if it’s the Fuji apples or the lemon and vanilla, but all I do know is that there is no need to add sugar to applesauce. In my opinion, God makes the best tasting candy: fruit!

One way I’m able to share recipes with you all is by adapting recipes I find on the internet. The Easy Crockpot Applesauce I tried needed no adapting in my opinion, so I knew I would have to get a little more creative. That’s where Persimmons come in! I had actually never eaten a persimmon until I moved to New York. I don’t know if I’d even seen them until the Asian Mart across my street started selling them. If you’ve never tried one you really need to! They have a similar texture to apples, but are slightly creamier. I decided to make another batch of applesauce, but this time swap out some of the apples for persimmons. Guys, this recipe is simply delicious! The apples and persimmons pair beautifully together and the persimmons give the sauce such a unique and vibrant orange color! And if you don’t have a crazy crockpot that requires baby sitting like mine, this recipe couldn’t be easier to make. Enjoy! 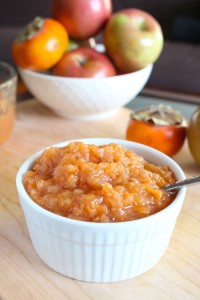 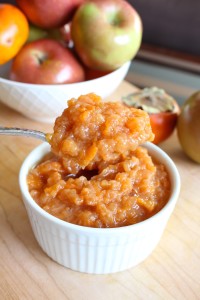 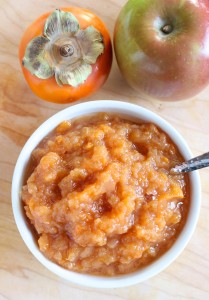 *If you don't have fuyu persimmons available nearby, you can just use two more apples.

**I say 3-6 hours, because the original recipe says 4-6 hours on high, but my crockpot is so powerful it only takes 3!