You are here: Home | Cuisine | Tex-Mex 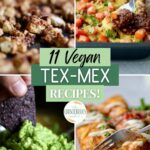 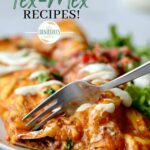 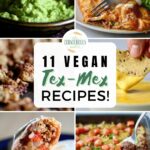 From vegan enchiladas to burritos, vegan nachos to dairy-free sour cream, these vegan Tex-Mex recipes are filling, full of flavor, and most importantly full of whole food, plant-based ingredients!

I don't think I'd ever turn down some Tex-Mex.

Especially if it's vegan Tex-Mex!

I didn't even grow up in Texas (or Mexico), but whenever I eat the food, I leave the table full and satisfied.

Tex-Mex is good for so many reasons, but the reason I love it so much is that it's flavorful, versatile and allergy-friendly.

It's so easy to make an entire Tex-Mex meal that is both vegan and gluten-free!

Even if you have a soy or nut allergy, you can easily find a healthy and delicious vegan recipe to meet your dietary needs (and palate!)

Today we're looking at flavorful, healthy and versatile vegan Tex-Mex recipes. I'll be sharing which foods are almost always vegan and which ones you may need to find a substitute for.

I'll also be sharing 11 of my favorite vegan Tex-Mex recipes!

"Tex-Mex" is short for Texan-Mexican. Even though the term Tex-Mex was first used to refer to the Texas Mexican Railway in the 1800s, when people say "Tex-Mex" today, they are referring to the Tex-Mex cuisine.

Tex-Mex vs Mexican vs Southwestern

While there are a lot of similarities among these cuisines, there are some key differences.

Tex-Mex food typically features the use of shredded cheese or "queso" (which is cheese dip, Americans love cheese!), black beans, pinto beans, and meats such as ground beef, chicken and pork.

Yeah, most Tex-Mex food isn't vegan, but that doesn't mean we can't make it vegan (and delicious!)

The use of cumin as a spice is also characteristic of Tex-Mex cuisine.

Southwestern food has many variations in the states of New Mexico, Arizona (also called Sonoran food named after the Sonoran desert which is found in Arizona), California, Nevada, Utah, and Texas.

You won't find much yellow cheese south of the border. Mexicans typically use white cheese, so the use of white cheese is a distinguishing characteristic of authentic Mexican food from Tex-Mex or southwestern cuisines.

Thankfully, the primary dishes most people enjoy such as tacos, burritos, enchiladas and fajitas can easily be made vegan if you want.

The vast majority of ingredients in a Tex-Mex dish are vegan or can easily be made vegan.

If you're buying these items from the store yourself or making them at home, it's easy to ensure they are all vegan.

However, if you are eating out at a restaurant, you'll need to ask the server if certain items are in fact vegan.

For instance, some restaurants cook their beans in lard or use lard in their tortillas.

Sometimes veggies are also cooked in animal fat or butter, so you may want to ask about that as well.

Obviously there are quite a few ingredients that are not vegan which are often found in Tex-Mex dishes.

If meats such as chicken, beef, carne asada, carnitas, or barbacoa are added to a Tex-Mex recipe, it makes the recipe non-vegan.

Since seafood is an animal product, recipes with fish or shrimp are not vegan.

Dairy products, such as shredded cheese and sour cream also make a recipe not vegan.

To find vegan substitutes for these ingredients, see below.

How To Make Tex-Mex Recipes Vegan

Again, if you're cooking for yourself at home, it's easy to make vegan version of popular non-vegan Tex-Mex ingredients.

For a vegan substitute for ground beef, use my Vegan Taco Tofu Crumbles.

For a vegan substitute for other meats, try grilled portobello mushrooms.

As for vegan substitutes for shredded cheese, you should try out my Super Simple Nacho Cheese Sauce! Or you can purchase store-bought vegan shredded cheese from brands such as Daiya, Chao, or Violife.

For a vegan substitute for sour cream, use my 5 Ingredient Vegan Sour Cream.

Substituting whole wheat tortillas for flour tortillas is a great way to reduce the amount of processed flour in your diet and increase your whole grains!

Below is a quick comparison of flour tortillas and corn tortillas in case you're wondering which tortilla to choose for your next vegan Tex-Mex feast. 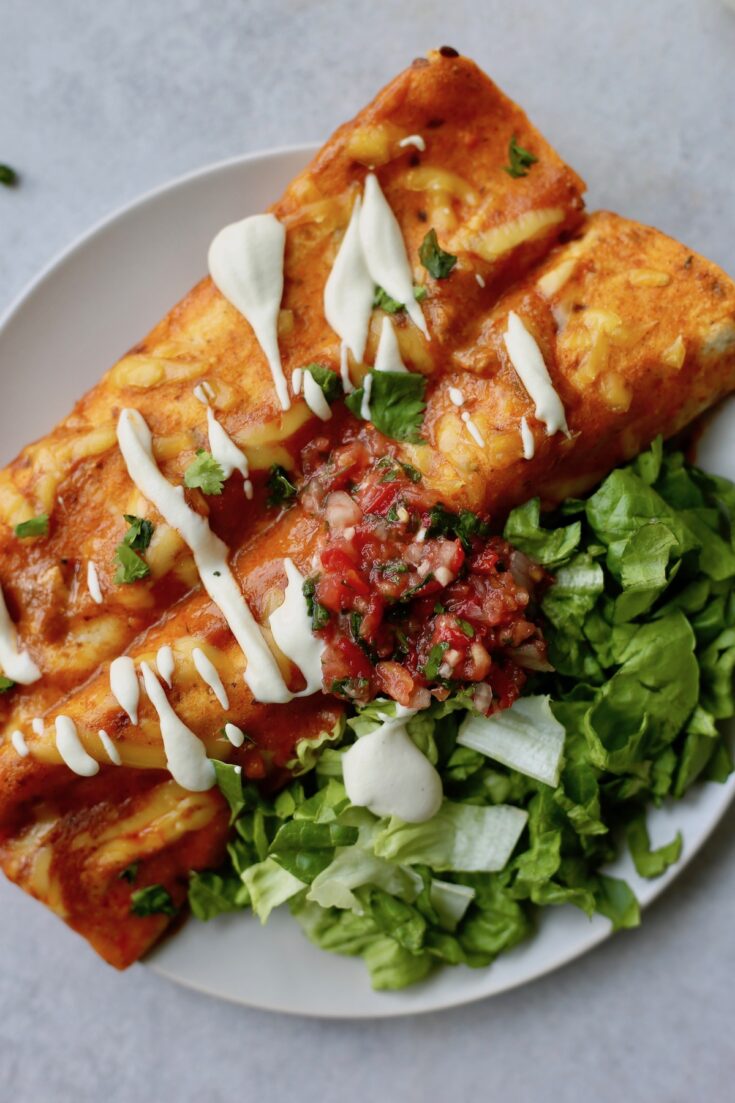 This delicious vegan enchilada recipe is a healthy take on a traditional comfort food that your family will love! 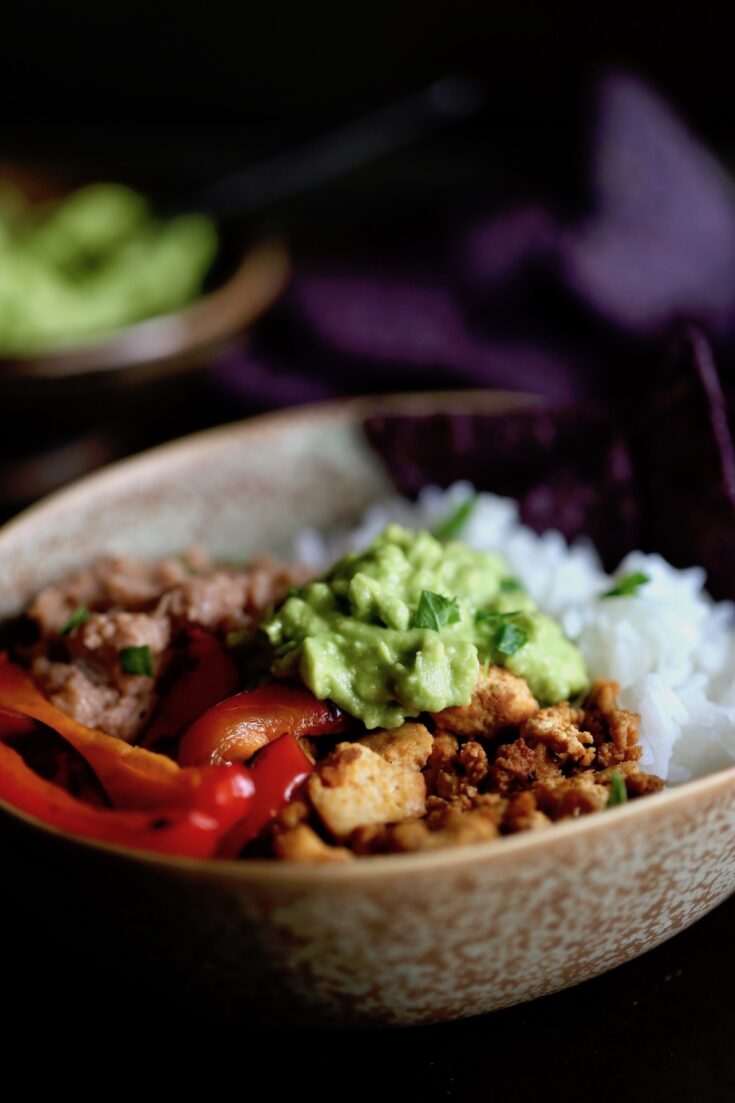 Filled to the brim with fluffy white rice, taco tofu crumbles and creamy homemade guac, these Vegan Burrito Bowls are a staple in our home! 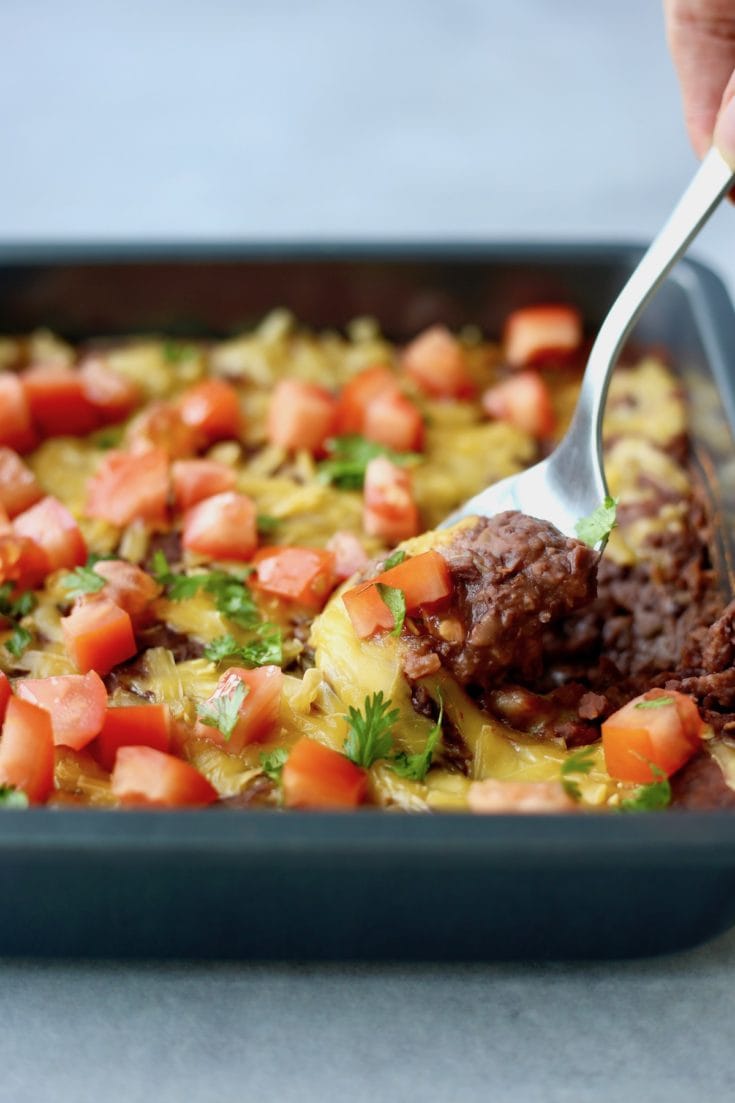 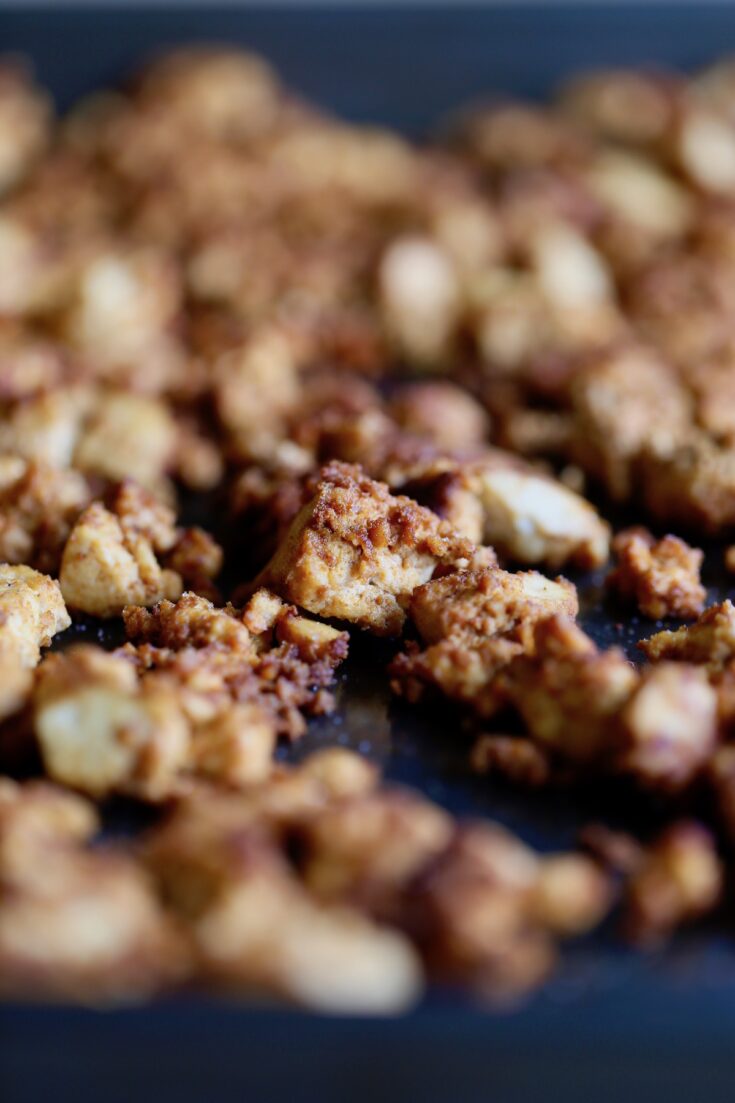 Made with just 6 ingredients and minimal hands-on-time, these salty and flavorful Vegan Taco Tofu Crumbles make for the perfect filling for plant-based tacos, burritos and buddha bowls! 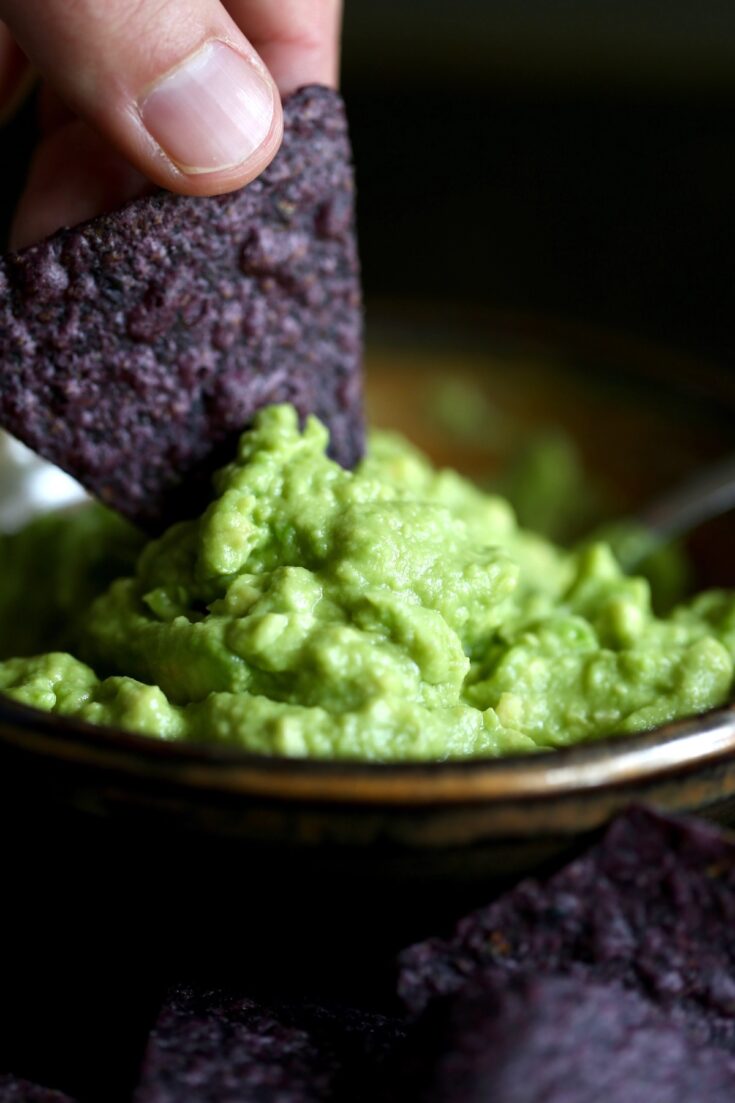 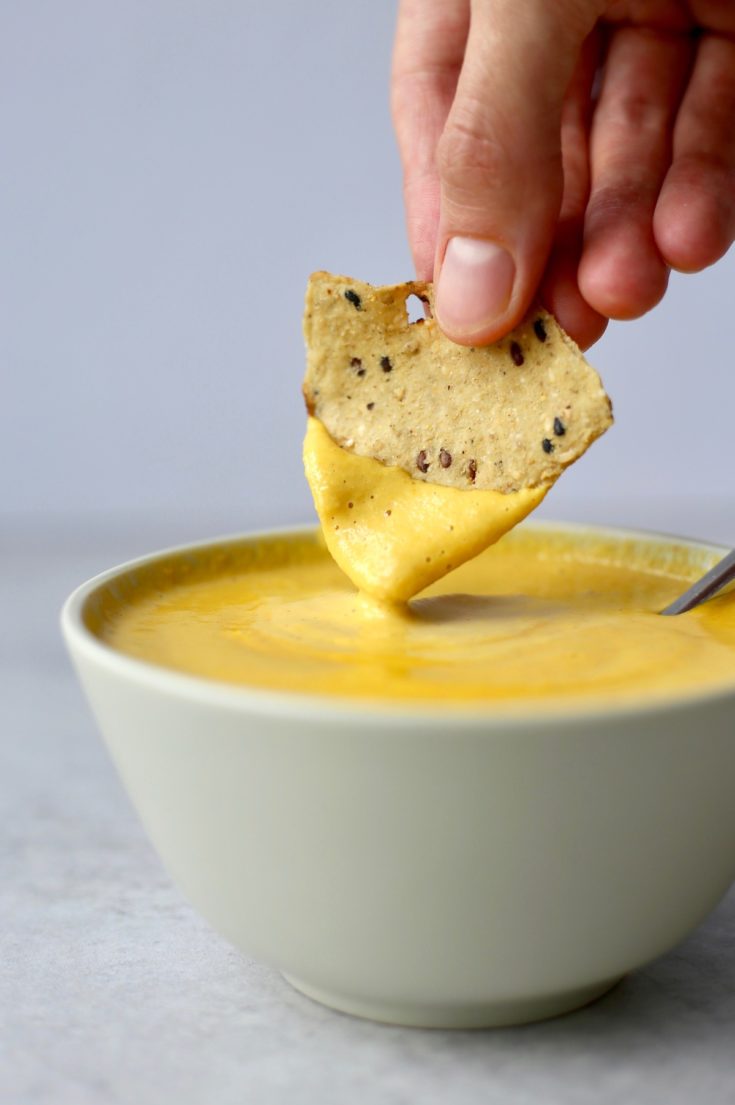 Made with whole food, pantry-friendly ingredients, this super simple Vegan Nacho Cheese Sauce will quickly become a staple in your diet. It's savory, creamy and rich and can turn the most basic meal into something incredible! 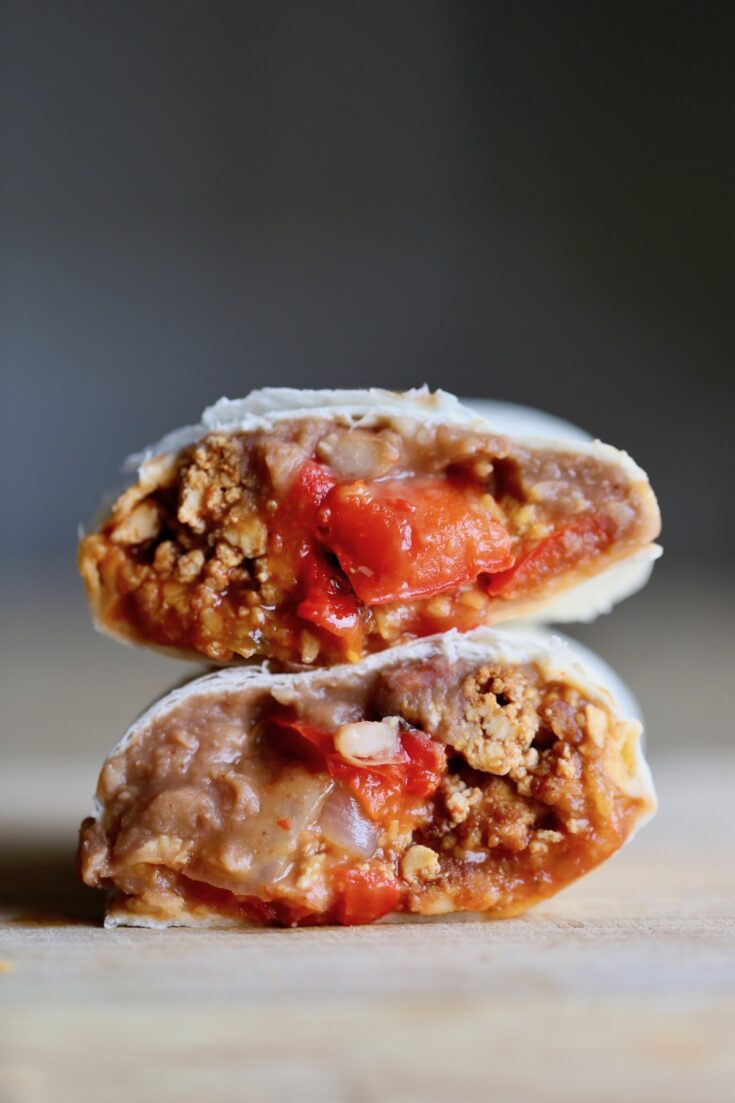 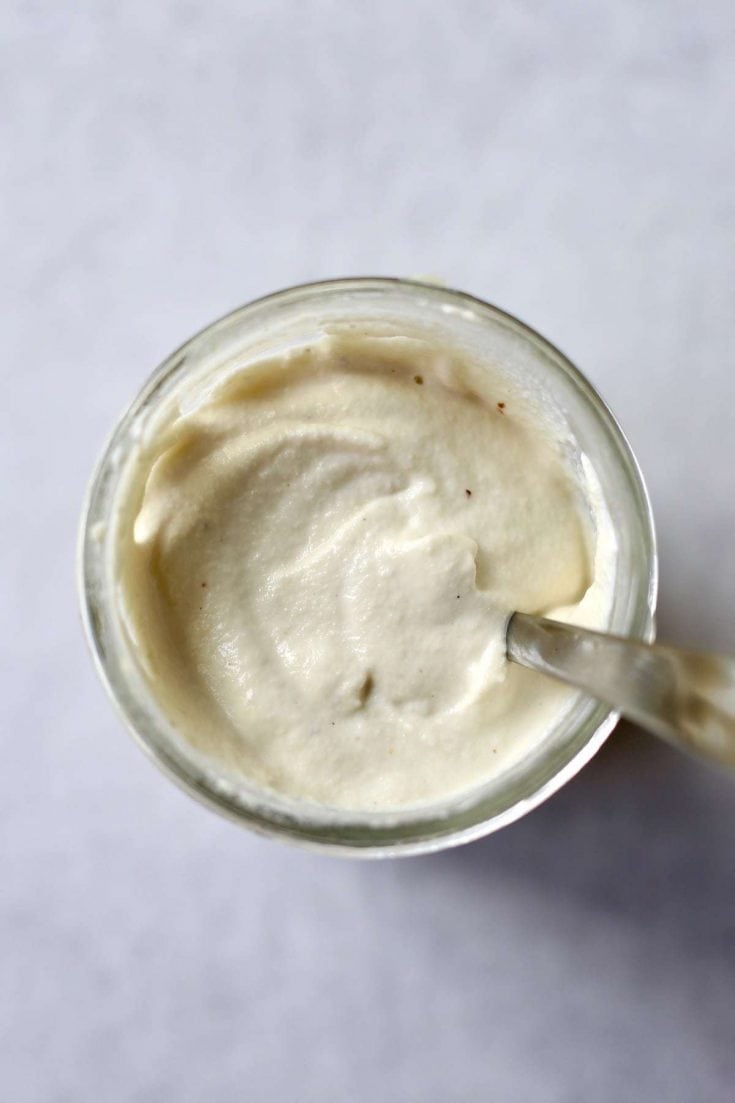 This easy, 5 ingredient sour cream recipe is tangy, creamy and is a perfect substitute for regular dairy sour cream! 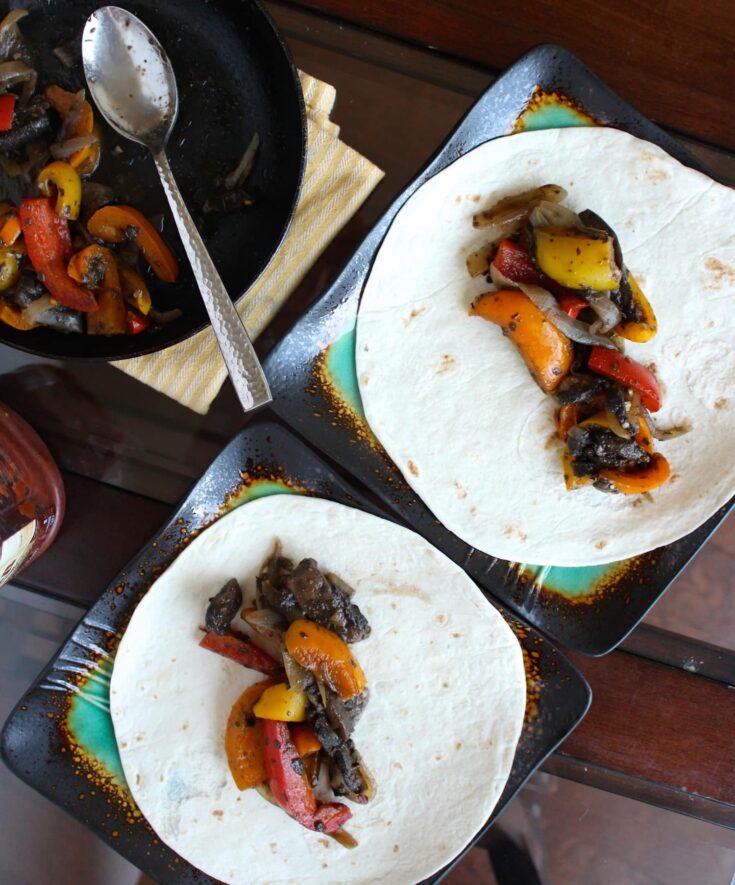 These Vegan Portobello Mushroom Fajitas come together in a flash and will please even the pickiest meat eaters! 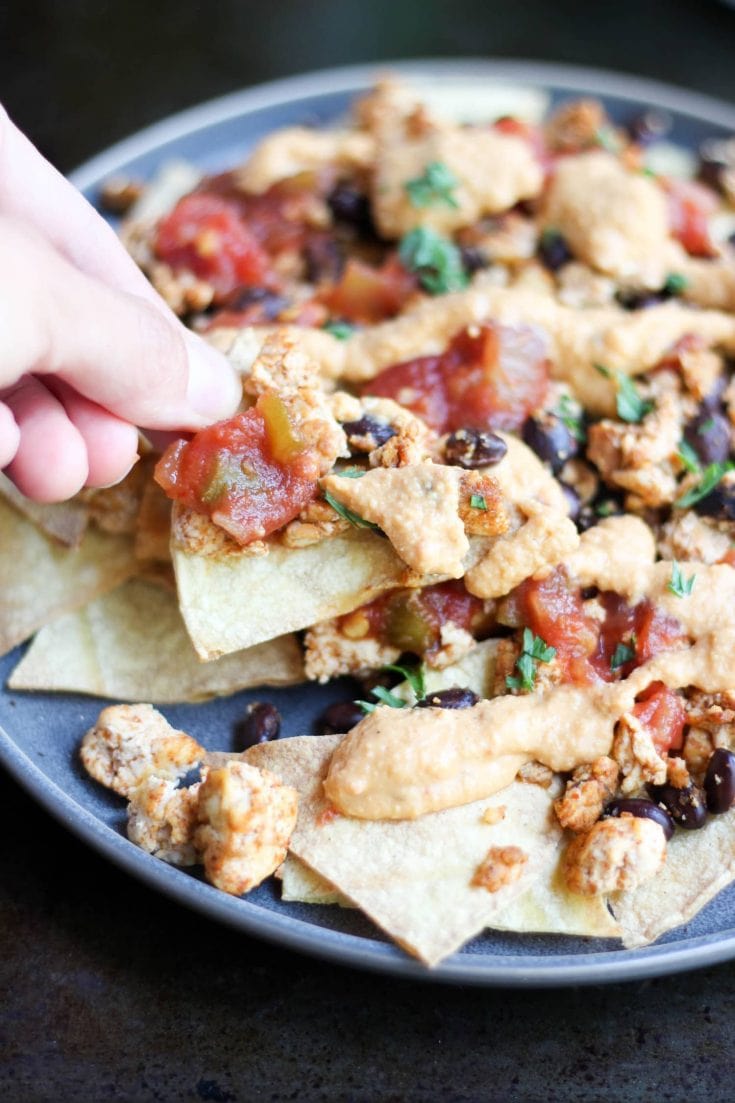 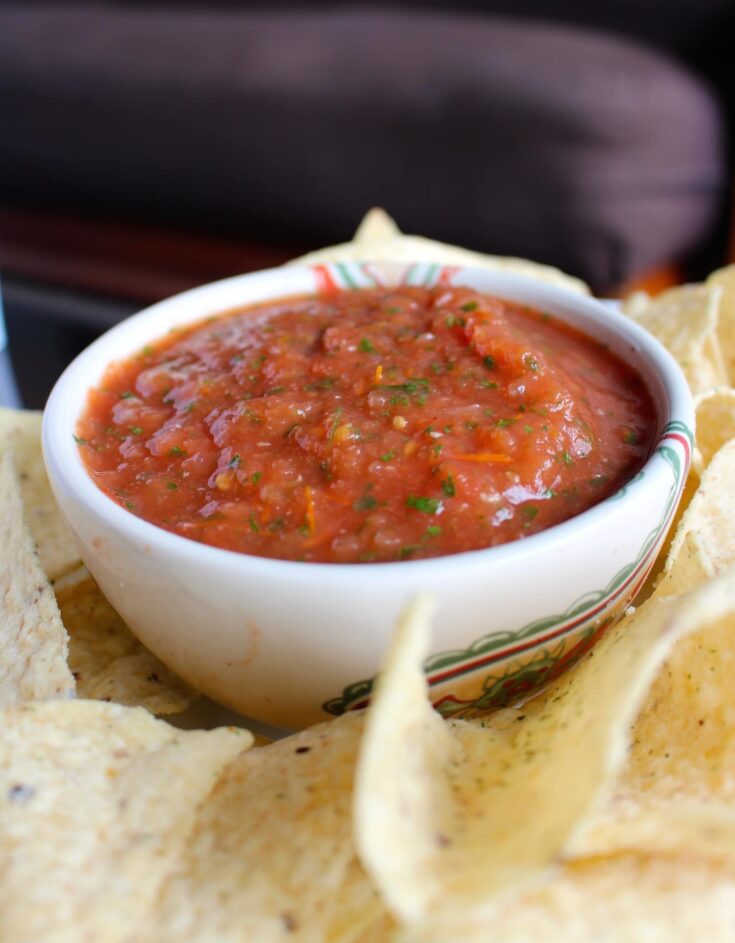 This Easy Roasted Tomato Blender Salsa is the perfect summer topping for tacos, salad, and everything in between.

Most plain, store-bought tortillas are vegan. However, check the ingredients list to make sure there is no milk, butter or whey.

Many tex-mex recipes can easily be made vegan, but if there is meat (such as chicken, beef, carne asada, carnitas, or barbacoa) or dairy-based cheese, then the dish is not vegan.

Vegan Tex-Mex can be very healthy because a large portion of the dishes can be made from whole food plant-based ingredients such as rice, beans, grilled veggies, tomatoes, onions, avocados, and lettuce.

What is a chimichanga?

A chimichanga, "chimmy", or "chimi" is a burrito that has been deep fried.

Chimichangas are not as a healthy as a burrito because the entire burrito has been deep fried. While they can be filled with whole food, plant-based ingredients, chimichangas from Tex-Mex restaurants are still typically high in calories, high in saturated fat and deep fried, so most people would not consider them to be healthy.

From vegan enchiladas to burritos, vegan nachos to dairy-free sour cream, these vegan Tex-Mex recipes are filling, full of flavor, and most importantly full of whole food, plant-based ingredients!

Click on the recipe names below to get the recipes.